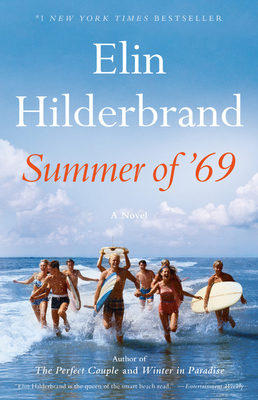 Four siblings experience the drama, intrigue, and upheaval of the '60s summer when everything changed in Elin Hilderbrand's #1 New York Times bestselling historical novel.
Welcome to the most tumultuous summer of the twentieth century. It's 1969, and for the Levin family, the times they are a-changing. Every year the children have looked forward to spending the summer at their grandmother's historic home in downtown Nantucket. But like so much else in America, nothing is the same: Blair, the oldest sister, is marooned in Boston, pregnant with twins and unable to travel. Middle sister Kirby, caught up in the thrilling vortex of civil rights protests and determined to be independent, takes a summer job on Martha's Vineyard. Only-son Tiger is an infantry soldier, recently deployed to Vietnam. And thirteen-year-old Jessie suddenly feels like an only child, marooned in the house with her out-of-touch grandmother and her worried mother, while each of them hides a troubling secret.
As the summer heats up, Ted Kennedy sinks a car in Chappaquiddick, man flies to the moon, and Jessie and her family experience their own dramatic upheavals along with the rest of the country. In her first historical novel, rich with the details of an era that shaped both a nation and an island thirty miles out to sea, Elin Hilderbrand once again earns her title as queen of the summer novel.

"The grande dame of beach reads...Hilderbrand shifts among characters with her usual ease, weaving a saga that will make you forget the dynamics of your own dysfunctional people as you crowd into a too-small vacation rental."
—Liz Egan, New York Times Book Review

"An engrossing tale of an iconic American summer"
—People Magazine

"Overall this novel is an entertaining bagatelle . . . There won't be a single transistor radio this summer on Singing Beach in Manchester-by-the-Sea, nor on Madaket Beach in Nantucket. But there almost certainly will be multiple copies of Summer of '69. It's this year's beach-reading cure for . . . the summertime blues."—The Boston Globe

"Superb...Hilderbrand hits all the right notes about life in a tightly knit family, and this crowd-pleaser is sure to satisfy both her fans and newcomers alike."
—Publishers Weekly, starred review

"Hilderbrand's characters are utterly convincing and immediately draw us into their problems, from petty to grave...To use the parlance of the period, a highly relevant retrospective."
—Kirkus

"Misunderstandings, secrets, and wrong choices are revealed in this completely satisfying novel that is the beach read of the summer, sure to appeal to Hilderbrand's fans while earning her new readers. A must buy."
—The Library Journal

"She presents another breezy yet gritty novel with Summer of '69... Simple, sassy, and continuously engaging, Summer of '69 fits neatly into the nostalgic reader's beach bag."—NPR

"With vivid descriptions of the songs, fashions and other details of the era woven throughout, it's a true nostalgia trip."
—AARP

Elin Hilderbrand was born on July 17, 1969 in Boston, Massachusetts. She has used her fifty years to write twenty-three novels and raise three children on Nantucket Island.
Loading...
or
Not Currently Available for Direct Purchase