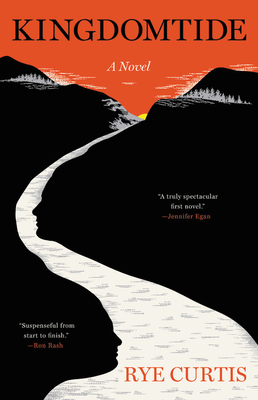 “Original, fresh, and vulnerable. As soon as I finished Kingdomtide, I wanted to read it all over again. The shared plotline of the main characters felt like a heartbeat, speeding up and slowing down as they dealt with what life handed them. This story felt so real, not just in the sense that it could truly happen, but the feelings and emotions and conflicts the characters struggled through, with themselves, others, and society as a whole. A must-read for 2020, it really blew me away. I can’t wait for Curtis’ next novel.”
— Jen Morrow, Bards Alley, Vienna, VA
View the List

The lives of two women—the sole survivor of an airplane crash and the troubled park ranger leading the rescue mission—collide in this "gripping," (Vogue) "heart-pounding," (NPR) and "highly original" (LA Times) novel of tough-minded resilience.


The sole survivor of a plane crash, seventy-two-year-old Cloris Waldrip is lost and alone in the unforgiving wilderness of Montana's rugged Bitterroot Range, exposed to the elements with no tools beyond her wits and ingenuity. Intertwined with her story is Debra Lewis, a park ranger struggling with addiction and a recent divorce who is galvanized by her new mission to find and rescue Cloris.

As Cloris wanders mountain forests and valleys, subsisting on whatever she can scavenge, her hold on life ever more precarious, Ranger Lewis and her motley group of oddball rescuers follow the trail of clues she's left behind. Days stretch into weeks, and hope begins to fade. But with nearly everyone else giving up, Ranger Lewis stays true until the end.

Dramatic and morally complex, Kingdomtide is a story of the decency and surprising resilience of ordinary people faced with extraordinary circumstances. In powerful, exquisite prose, debut novelist Rye Curtis delivers an inspiring account of two unforgettable characters whose heroism reminds us that survival is only the beginning.

"Gritty and intense."—O, The Oprah Magazine

"A startling reversal to the typical survival story... Abounds in homespun sensory detail... Rye Curtis complicates the expected adventure-novel payoff... Cloris's narration grows increasingly vulnerable, surprising, and profound. The wonder of her ordeal has detached her from ordinary cares yet made her ravenously curious about the big, unanswerable questions."—Sam Sacks, Wall Street Journal

"Rye Curtis's debut novel, Kingdomtide, is that rare genre-fluid story that is lovable both because of and despite its surfeit of eccentric, over-the-top characters and moments. Some are gritty and dark, others light and wise; together they create an impressive first book and a highly original tale of adventure and perseverance... Cloris Waldrip is immediately irresistible. Her first-person voice bubbles with a sage vibrancy as well as sometimes laugh-out-loud wit... It's Waldrip who suggests that life stories are shaped by those who live to retell them---something she has done in this narrative with formidable grace... Kingdomtide is a distinctive and inventive story about nonconformity, resilience, and the ways we draw strength from unlikely places."—Janet Kinosian, Los Angeles Times

"Harrowing... In beautiful prose this horrifying and brutal work of art bounces between Cloris's and Debra's narratives. Together, these unforgettable women create a unique literary novel full of suspense and twists... The entire cast of characters is layered and raw... Underneath this gritty and dark tale is the message that sometimes heroism and kindness emerge from those we despise and fear the most."—Tiah Beautement, Sunday Times

"Kingdomtide is a truly spectacular first novel: weird, tender, funny, grotesque--above all, deeply, achingly human. It tugged at my thoughts during the days I spent reading it, and has made for itself a permanent place in my memory."—Jennifer Egan, Pulitzer prize-winning author of Manhattan Beach and A Visit from the Goon Squad

"Rye Curtis's debut novel is an astonishing work. His powerful and convincing characters are at risk in a harsh and beautiful landscape in which the best and worst are revealed, and nothing is as it initially seems. Kingdomtide is at once a page-turner and a meditation on the complexity of the human experience and spirit."—Daniel Woodrell, author of Winter's Bone and The Maid's Version

"An entertaining debut...The characters are appealing (you'll love Cloris) and the story is suspenseful, with a nice touch of humor."—Christina Ianzito, AARP

"An unforgettable experience... The author is an extraordinary writer whose books will surely be eagerly anticipated and welcomed with glee."—C.C. Harrison, New York Journal of Books

"First novels are often praised for an author's potential, but Kingdomtide displays a talent fully realized. Cloris Waldrip's trek through wilderness after a plane crash is suspenseful from start to finish, but as the lives of her potential rescuers are revealed, the novel also moves through the even deeper wilderness of the human heart. Rye Curtis is a writer of exceptional talent."—Ron Rash, New York Times bestselling author of Serena

"Holy smokes! I was sucked into this novel by the end of the first
paragraph. If Flannery O'Connor wrote a procedural, she couldn't invent a
stranger, more luminous world. This is a place where the grotesque and the
sublime coexist in harmony, where misfits and outcasts band together to
survive, and where the tale belongs to whoever tells it best--in this case, the
immensely talented Rye Curtis."—Christina Bake Kline, #1 New York Times bestselling author of Orphan Train and A Piece of the World

"I read a lot of very good fiction, but this novel--so startling and
thrilling, so packed with such wonderful characters--is the best novel I've read
in a long time."—Roddy Doyle, Booker Prize-winning author of Paddy Clarke Ha Ha Ha and A Star Called Henry

"Kingdomtide is much more than a harrowing tale of survival in the Bitterroot Mountains of Montana. A plane crash and rescue operation in this debut are but a pretext for a rich and stunning examination of the wayward. Rye Curtis has written a splendid, funny, and insightful book, and created an exuberant affirmation of the soul--lost, found, or (like most of us) in some kind of transit."—Smith Henderson, author of Fourth of July Creek

"Kingdomtide is an extraordinary debut novel that feels like the result of a fortuitous lab spill involving, in one rack of tubes, the essential literary fluids of Denis Johnson, Annie Proulx, and Flannery O'Connor, and, in the other, the sweet morality of Leif Enger, Kent Haruf, and Charles Portis. (When you think of the indelible Cloris Waldrip of these pages, picture True Grit's Mattie Ross at age seventy-two, still kicking ass and taking names.) But although a reader can at times sense various veins coming down from various mountains, they are always in service of the one big heart that becomes Kingdomtide, a book that is wise, touching, and most of all original."—Rick Bass, author national bestseller and Story Prize winner of For a Little While

"Stop reading this blurb right now and read the first paragraph of Kingdomtide. If you can stop after that, you'll know you're a robot. A defective robot. Kingdomtide will bring you to tears of laughter, tears of joy, and...are there tears of insight? Rye Curtis is a fireball of talent."—James Hannaham, PEN/Faulkner Award winner for Delicious Foods

"Gloriously
unexpected...A deep and surprising debut...Cloris' survival narration is exciting,
with devastating vistas and a mysterious savior in the form of a possible
fugitive, but her musings on her past life and life in general are some of the
book's very best moments."—Annie Bostrom, Booklist

"A darkly humorous debut...A captivating survival story...By turns thrilling, poignant, and hilarious, Kingdomtide is carried along by Cloris Waldrip's irresistible first-person narration. She is so matter-of-fact, wry, and indomitable it's not hard to imagine she's a granddaughter of True Grit's Mattie Ross...This is a promising first novel."—Kirkus Reviews

"An intense debut...Seventy-two-year-old Cloris Waldrip's grueling
attempt to survive and escape is depicted with vivid urgency...Her gritty,
nightmarish story, as well as her strong voice and personality, will make her a
reader favorite...This story of survival will keep readers quickly turning
the pages."—Publisher's Weekly

Rye Curtis is originally from Amarillo, Texas. He is a graduate of Columbia Univer­sity and lives on a ranch in Texas. Kingdomtide is his first novel.
Loading...
or support indie stores by buying on