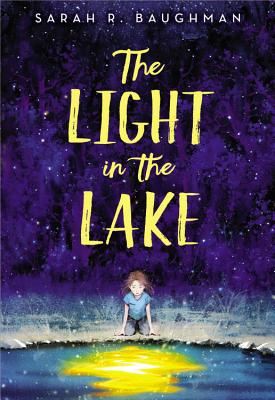 The Light in the Lake

Go on a journey of discovery, magic, science, and hope with this remarkable debut novel about a girl's powerful connection to a mysterious lake.

Twelve-year-old Addie should stay away from Maple Lake. After all, her twin brother, Amos, drowned there only a few months ago. But its crisp, clear water runs in Addie's veins, and the notebook Amos left behind -- filled with clues about a mysterious creature that lives in the lake's inky-blue depths -- keeps calling her back.

So despite her parents' fears, Addie accepts a Young Scientist position studying the lake for the summer, promising she'll stick to her job of measuring water pollution levels under adult supervision. Still, Addie can't resist the secrets of Maple Lake. She enlists the lead researcher's son, Tai, to help her investigate Amos's clues. As they collect evidence, they also learn that Maple Lake is in trouble -- and the source of the pollution might be close to home. Addie finds herself caught between the science she has always prized and the magic that brings her closer to her brother, and the choice she makes will change everything.

Praise For The Light in the Lake…

Praise for The Light in the Lake:

* "Baughman convincingly portrays the varied reactions to the findings as well as everybody's desire for the lake to thrive...Compassionately told, this compelling debut brings to life conservation issues and choices young readers will confront as adults."—Kirkus Reviews (starred review)

* "In Baughman's skillful handling, Addie's memories of her brother and her first-person voice are both heartbreaking and hopeful. The novel offers a gentle, introspective exploration of grief and the wonder and fragility of nature, creating a beautiful and dynamic world in which the scientific method and magic coexist."—Publishers Weekly (starred review)

"Haunting, memorable and full of mystery, The Light in the Lake is a brilliant combination of beautiful, lyrical prose and a compelling, exciting story. Baughman has created complex characters with real, deep emotions and a picturesque setting that will make readers feel as if they are at Maple Lake with Addie."—BookPage

"A complex take on science, magic, grief, and family for fans of thoughtful realistic fiction in the vein of Kathi Appelt's, Erin Entrada Kelly's, and Ali Benjamin's novels.—School Library Journal

"Baughman paints with authenticity the grief of Addie... Addie's unabashed love for science makes her a pleasingly STEM-focused heroine, and her quest to solve Amos' questions about the lake is interesting and admirable."—BCCB

"The Light in the Lake is a moving novel that skillfully balances magic and science, and loss and hope. Sarah Baughman has created a brave, smart protagonist readers are sure to connect with and root for in her compelling debut."—Supriya Kelkar, award-winning author of Ahimsa and American as Paneer Pie

"Told in prose as luminous as the mysterious creature Addie searches for, The Light in the Lake shines with heart, hope, and just a touch of magic."—Cindy Baldwin, author of Where the Watermelons Grow

"The Light in the Lake radiates with heart and hope. As Addie's tender memories of her brother intertwine with the magic she uncovers in her town's beloved lake, we're led on a moving exploration of science, grief, and self-discovery. A poignant, lyrical story that tugs at the heartstrings."—Mae Respicio, award-winning author of The House That Lou Built

"Drawing on the wonder of science and the power of magic, Baughman has crafted a story that plunges readers into the deep places of the heart. In The Light in the Lake she reminds us that not even the depths of loss can prevent the rise of light and discovery. A poignant story, filled to the brim with hope."—Beth Hautala, author of Waiting for Unicorns and The Ostrich and Other Lost Things

Sarah Baughman is the author of The Light in the Lake and a former middle and high school English teacher who now works as an educational consultant. She graduated from Grinnell College and the University of Michigan, then went on to teach English overseas in three different countries. After spending a number of years in rural northeastern Vermont, she recently moved back to Michigan with her husband and their two children.
Loading...
or support indie stores by buying on