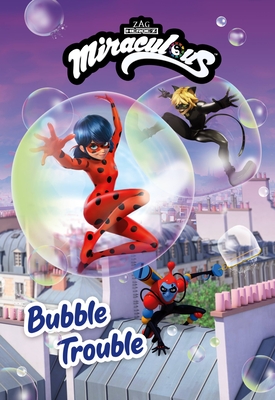 Join Ladybug and Cat Noir as they save the day in a full-color, action-packed chapter book series based on Miraculous: Tales of Ladybug and Cat Noir.
By day, Marinette and Adrien are teens living normal lives. But by night, they turn into Ladybug and Cat Noir and work together to keep Paris safe from the mysterious Hawk Moth.
It's Adrien's birthday! Marinette and Adrien's best friend, Nino, are ready to celebrate! When Nino finds out that Adrien's father won't let Adrien have a birthday party, Nino is crushed...and angry! Hawk Moth uses Nino's negative emotions to transform him into the supervillain Bubbler. Claiming that all parents ruin kids' fun, Bubbler wreaks havoc around the city as he uses his bubble wand to capture adults and send them into space. Can Cat Noir and Ladybug pop Bubbler's plans before it's too late?
Miraculous(TM) is a trademark of ZAG(TM) - Method(TM).
© 2021 ZAGTOON(TM) - METHOD ANIMATION(TM) - TOEI ANIMATION - SAMG - SK BROADBAND - AB INTERNATIONAL - DE AGOSTINI EDITORE S.p.A. ALL RIGHTS RESERVED.