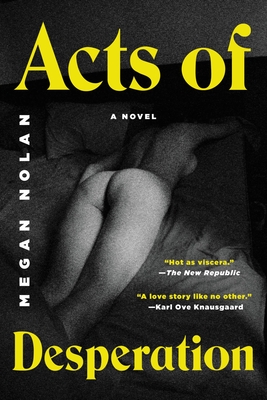 A "blistering anti-romance" (Catherine Lacey) about love addiction and what it does to us.

Wouldn’t I do anything to reverse my loss, the absence of him?

In the first scene of this provocative gut-punch of a novel, our unnamed narrator meets a magnetic writer named Ciaran and falls, against her better judgment, completely in his power. After a brief, all-consuming romance he abruptly rejects her, sending her into a tailspin of jealous obsession and longing. If he ever comes back to her, she resolves to hang onto him and his love at all costs, even if it destroys her…

Part breathless confession, part lucid critique, Acts of Desperation renders a consciousness split between rebellion and submission, between escaping degradation and eroticizing it, between loving and being lovable. With unsettling, electric precision, Nolan dissects one of life’s most elusive mysteries: Why do we want what we want, and how do we want it?

Heralding the arrival of a stunning new literary talent, Acts of Desperation interrogates the nature of fantasy, desire, and power, challenging us to reckon honestly with our own insatiability.


Praise For Acts of Desperation…

“Megan Nolan is a huge literary talent, and her first novel, Acts of Desperation, is a love story like no other. The writing is intense and honest, with a rare access to real life, but it is also reflective and full of insights, and with this combination the novel manages to separate the idea of love and the experience of it, and take the reader to the place where it comes into being.”
—KARL OVE KNAUSGAARD

“Megan Nolan writes with piercing vulnerability and precision. Her debut novel, Acts of Desperation is a blistering anti-romance about the seductive destruction of trying to find self-worth in the gaze of another.”—CATHERINE LACEY, author of PEW and THE ANSWERS

"I devoured this book, my heart trilling with equal parts terror and exhilaration. It is an emotional thriller, a portrait of obsession—its pleasures and powerlessness, its inevitable corruption not only of integrity, but even selfhood. Nolan's prose is cool and liquid, her content perfectly scorching. I loved this taut and torturous ode to the parts of us that persist, even as we are wrecked by love."
—MELISSA FEBOS, author of ABANDON ME and WHIP SMART

“Nolan’s raw and uncannily insightful writing glimmers in a way that will shed new light onto wounds both healed and open — and possibly save some other nameless woman the suffering. She tells the truth about obsession and drains it of all allure.”
—NEW YORK TIMES BOOK REVIEW

“Wrenching…a chronicle of a sinister, deeply imbalanced and unsettlingly familiar romantic relationship…Nolan’s writing gleams with dark precision. Her narrator’s piercing, almost perverse self-awareness makes the action both more sad and more urgent…The decision to hold in suspicion the very form she is enacting is what makes the book refreshing and complex. What Acts of Desperation illuminates best is the chasm, sadly still enormous, between feminist politics and personal predicaments of love, sex and romance. The novel is a powerful counterweight to the notion that young women today are free to define themselves apart from men…It is satisfying to see a young female narrator wrest control of the story of her debasement, to show both its specificity and its utter sameness, her victimhood and her complicity.”
—LOS ANGELES TIMES

“Nolan spins romantic obsession into literary gold…It’s no surprise that Megan Nolan’s ACTS OF DESPERATION is already being called the next Normal People…Nolan, a more bruising writer than Rooney, is also a braver one in many ways—or one with the courage, at least, to let her characters be ugly in a way that Normal rarely does….If Nolan as a novelist weren’t so deeply smart and self-aware, you might want to shake her wounded protagonist out of it. Instead there’s just the sharp kick of recognition—and sympathy.”
—ENTERTAINMENT WEEKLY

“Nolan makes this novel of the thin line between romantic obsession and abuse so readable and relatable you’ll tear through it as if it’s a beach read.”
—GLAMOUR

“Frightening and feverish, compulsive and distressing, and as true-seeming a document of toxic and manipulative love as any published within memory…Acts of Desperation is, in other words, that squirmy argument between the sexes from Midsommar spread over 250 elegantly written pages—a psychosexual thriller about the ecstasy and embarrassment of being a woman who has sex with, and who falls in love with, men… Bodily and alive—hot as viscera, inward-looking, dark and soft…in other ways, its subject could not be more staggering in its scope, its savage, internecine central relationship serving as a bleak reminder of the ways in which the sexes have been socialized to be at odds, even in romance.”
—THE NEW REPUBLIC

"Please believe the hype...I was transfixed with admiration and visceral horror…Nolan’s headlong, fearless prose feels like salt wind on cracked lips. You wince and you thrill.”—THE SUNDAY TIMES

“This is a novel that does not shy away from the grim realities of sexual violence — and more specifically, the fact that male violence is endemic, and that the vast majority of rapists are known to their victims…Nolan deploys individual suffering as a weapon in the fight against collective injustice…While melodrama is normally considered to overwhelm the emotions at the expense of characterization, Nolan — freed from the constraints of stage and screen — does the opposite. Like Ibsen, she attends to the meanings and consequences of the smallest physical and bodily details.”
—JACOBIN

“Acts of Desperation is not simply a portrait of a relationship that descends briskly into the coercive and abusive; it is also an exploration of early adult life, of lostness and excess, of alienation and complicity… This is why Acts of Desperation is so resonant; its bad relationships, the over-drinking and the unsatisfactory jobs are symptoms of a deeper sense of distress, a feeling of being out of kilter with the world…Nolan’s subject matter chimes with a frank exploration of interiority and pain that is hardly uncommon in fiction, but it is strikingly singular.”—THE GUARDIAN

“Acts of Desperation charts the obsession of an unnamed narrator…with forensic focus and biting honesty.”
—THE OBSERVER, 10 Best Debut Novelists of 2021

“Ruthlessly peels back the ego to expose the soul’s most discomfiting corners… Acts of Desperation? submerges you in her interior life with?Knausgaardian?intensity…Her rejection of cliché and a savage honesty bordering on masochism recall writers such as Elena Ferrante and Jenny Diski…Nolan’s portrait of a relationship warped by obsession and low self-worth excavates our private hearts.”

“Nolan, a young Irish writer known for her unsparing essays on subjects such as abortion, joins the likes of Sally Rooney and Raven Leilani with this tempestuous, Dublin-set debut about a hard-drinking millennial whose hunger for validation leads her into a torrid relationship with a jealous writer… Impossible not to devour, it's an unsettling book that leaves you chewing queasily on its knotty, gristly core, despite the narrative's redemptive framing as an act of purgative retrospection.”
—THE DAILY MAIL

“A bracing and poignant story of a young woman’s awakening; the writing is lucid and devastatingly accurate...With her narrator’s whipsmart tone, low self-esteem issues and penchant for sexual debasement, Nolan will likely be compared to contemporary writers such as Sally Rooney, Kristen Roupenian and Ottessa Moshfegh. While these comparisons certainly hold, in Acts of Desperation there is a sweeter sense of openness to the world, despite its many problems. The wry social commentary is there, but it’s from the perspective of a character who hasn’t yet withdrawn from the world she critiques.”
—THE IRISH TIMES

“[Nolan] divulges the many complexities and contradictions of female desire.”—Debanjana Das, BUZZFEED

“A tour de force chronicling the many paradoxes of female desire… Nolan hasn’t assigned any names to her narrator as she is one of us: a self that eroticizes her own humiliation to survive patriarchy, and that every woman carries.”
—BOOKRIOT

"Nolan’s unwillingness to spare her protagonist or the reader is a gamble that pays off. It’s a rigorous study of a gross but key piece of the human condition, nestled in the set dressing of precise, excellent prose."—Sara Shahzad, Boston Globe

"Acts of Desperation is an unsparing novel about the troubling dimensions of our sexual desire."—Yen Pham, The Nation

Megan Nolan was born in Waterford, Ireland and lives in London. Her essays, fiction and reviews published in the New York Times, the White Review, the New Statesman, the Sunday Times, the Village Voice, the Guardian, and in the literary anthology Winter Papers. Acts of Desperation is her first novel.
Loading...
or support indie stores by buying on