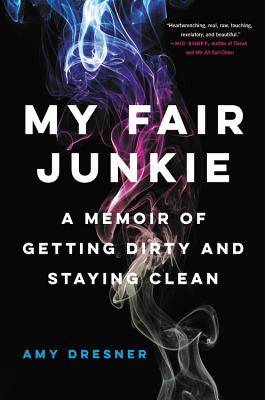 A Memoir of Getting Dirty and Staying Clean

In the tradition of Blackout and Permanent Midnight, a darkly funny and revealing debut memoir of one woman's twenty-year battle with sex, drugs, and alcohol addiction, and what happens when she finally emerges on the other side.

Growing up in Beverly Hills, Amy Dresner had it all: a top-notch private school education, the most expensive summer camps, and even a weekly clothing allowance. But at 24, she started dabbling in meth in San Francisco and unleashed a fiendish addiction monster. Soon, if you could snort it, smoke it, or have sex with, she did.

Smart and charming, with Daddy's money to fall back on, she sort of managed to keep it all together. But on Christmas Eve 2011 all of that changed when, high on Oxycontin, she stupidly "brandished" a bread knife on her husband and was promptly arrested for "felony domestic violence with a deadly weapon."

Within months, she found herself in the psych ward--and then penniless, divorced, and looking at 240 hours of court-ordered community service. For two years, assigned to a Hollywood Boulevard "chain gang," she swept up syringes (and worse) as she bounced from rehabs to halfway houses, all while struggling with sobriety, sex addiction, and starting over in her forties.

In the tradition of Orange Is the New Black and Jerry Stahl's Permanent Midnight, Amy Dresner's My Fair Junkie is an insightful, darkly funny, and shamelessly honest memoir of one woman's battle with all forms of addiction, hitting rock bottom, and forging a path to a life worth living.

Praise For My Fair Junkie: A Memoir of Getting Dirty and Staying Clean…

One of BookAuthority's Best Memoir Books of All Time

"Dresner's book is a sickening masterpiece. Hilarious and raw, she cuts to bony truth. I love her!"—Margaret Cho

"Like Carrie Fisher's 1987 autobiographical novel, Postcards From the Edge, and Mary Karr's 2009 memoir, Lit, Amy Dresner's story of addiction and recovery, My Fair Junkie: A Memoir of Getting Dirty and Stay Clean (Hachette Books), is one for the ages."—Elle

"Mortifying, hilarious, unsparing, and weirdly life-affirming, My Fair Junkie hits the ground screaming and never lets up. As with all great 'drug memoirs,' the subject of this raw, squirm-fest of an autobiography is not drugs, but what made drugs necessary: the twisted history and relatably depraved torments of the author's own strung-out heart. For fans of Beyond Shame, low-bottom recollectors like Augusten Burroughs and Stephen Elliot, Amy Dresner has earned her spot on the shelf."—Jerry Stahl,author of Permanent Midnight

"Funny, raw, real, and moving. Amy's memoir digs deep inside the world of addiction and takes you on a ride you'd pay to go on again. Amy, like addiction, is a complicated beast that needs to be unraveled and exposed to understand--and she does just that in My Fair Junkie, an incredible read."—Amber Tozer, authorof Sober Stick Figure

"The story she tells
is hysterically funny at one moment and utterly harrowing the next--and often
manages to be both those things at once."—Lawrence Block, NewYork Times bestselling and award-winning crime novelist, journalist, andauthor of the short story collection Enough Rope

"Hypnotic,
magical, mesmerizing. Truly great. Amy Dresner is the most startlingly alert,
poetic, stunning writer I have come across in decades. She is a real talent
such as one rarely encounters."—Ben Stein, lawyer,economist, actor, and author of How to Ruin Your Financial Life

"One of the funniest, most heart wrenching, real, raw, touching, revelatory, and beautiful memoirs I've ever read. It transcends just the addiction lit genre to become something far more universal-something profoundly human-and captivating. I found myself laughing out loud over and over again, while, at the same time, being deeply moved by Dresner's account of addiction to more than just substances, but the need for connection in this increasingly disparate and fractured world."—Nic Sheff, author of Tweakand We All Fall Down

"Fascinating.
Uncomfortable....This book is a confessional and an indictment. I've loved girls
like Amy and they drug my heart through a human sewer of addiction. I've used
girls like Amy and I only feigned to care. Why do I find this so fucking
attractive? Well-written. Believable."—Jack Grisham,author of An American Demon

"Amy Dresner breaks my heart into a million pieces--and then slowly helps me put myself back together again. This is a wonderful
book, filled with a frenetic mixture of
snappy dialogue and terrifying truth."—Peter Scolari

"Dresner, a former stand-up comic and current contributing editor for The Fix, writes about her recovery from drug and alcohol abuse with honesty and irreverent humor. . . . Readers meet Dresner at her worst, but she nevertheless charms throughout her healing."—Publishers Weekly

"Effortlessly candid and wryly
written chronicle of a life hijacked by drugs, booze, and bad behavior. As a
noted West Hollywood stand-up comedian and addiction journalist, she handles
this complex tale with wit ... A hard-knocks addiction memoir buoyed with humor
and insight."—Kirkus

"In
Dresner's unflinchingly honest, graphic, and darkly comedic account of her life
as a junkie and the struggle to come clean, readers will find strength in the
humanity of those at their lowest. Dresner brings humility, wit, and
sensitivity to a topic many readers are unfamiliar with, and those that are
will recognize her truths."—Booklist

"Dresner's story of drugs, sex and a handful of
other addictions is wickedly funny and hauntingly honest."—FASHION magazine

"Tranfix[ing]...My Fair Junkie reminds you that sobriety and addiction has many faces, shapes, and stages and affects everyone."—Women.com, "9 Books About Drug Addiction that Shine Light onto the Disease"

Amy Dresner is a former professional stand-up comic, having appeared at The Comedy Store, The Laugh Factory, and The Improv. Since 2012, she has been the sole columnist for the online addiction and recovery magazine TheFix.com. She also recently started freelancing for the Good Men Project and has been a regular contributor to Addiction.com and PsychologyToday.com where she has her own addiction blog entitled Coming Clean and is one of only a select few contributors without a Ph.D. selected to write for the website.
Loading...
or
Not Currently Available for Direct Purchase