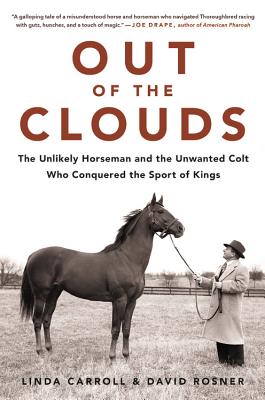 Out of the Clouds (Hardcover)

In the bestselling tradition of the The Eighty-Dollar Champion, the propulsive, inspiring Cinderella story of Stymie, an unwanted Thoroughbred, and Hirsch Jacobs, the once dirt-poor trainer who bought the colt on the cheap and molded him into the most popular horse of his time and the richest racehorse the world had ever seen.

In the wake of World War II, as turmoil and chaos were giving way to a spirit of optimism, Americans were looking for inspiration and role models showing that it was possible to start from the bottom and work your way up to the top-and they found it in Stymie, the failed racehorse plucked from the discard heap by trainer Hirsch Jacobs. Like Stymie, Jacobs was a commoner in "The Sport of Kings," a dirt-poor Brooklyn city slicker who forged an unlikely career as racing's winningest trainer by buying cheap, unsound nags and magically transforming them into winners. The $1,500 pittance Jacobs paid to claim Stymie became history's biggest bargain as the ultimate iron horse went on to run a whopping 131 races and win 25 stakes, becoming the first Thoroughbred ever to earn more than $900,000. The Cinderella champion nicknamed "The People's Horse" captivated the masses with his rousing charge-from-behind stretch runs, his gritty blue-collar work ethic, and his rags-to-riches success story. In a golden age when horse racing rivaled baseball and boxing as America's most popular pastime, he was every bit as inspiring a sports hero as Joe DiMaggio and Joe Louis.

Taking readers on a crowd-pleasing ride with Stymie and Jacobs, Out of the Clouds -- the winner of the Dr. Tony Ryan Book Award -- unwinds a real-life Horatio Alger tale of a dauntless team and its working-class fans who lived vicariously through the stouthearted little colt they embraced as their own.

Veteran journalists Linda Carroll and David Rosner have collaborated on two acclaimed nonfiction books -- The Concussion Crisis: Anatomy of a Silent Epidemic and, most recently, Duel for the Crown: Affirmed, Alydar, and Racing's Greatest Rivalry.

Carroll is a Peabody Award-winning writer who covers health and medicine for NBC News. An accomplished equestrian, she brings more than thirty years of experience in breeding, training, and showing horses. She owns and operates Fiery Run Farm, where she has hands-on control of breeding and training her eighteen Arabian and Oldenburg sport horses.

Rosner has worked as a sportswriter at major metro newspapers and as an editor of national magazines. As a reporter at Newsday in New York, he earned national Associated Press Sports Editors Association awards for investigative reporting and deadline writing. In addition to his book collaborations with Carroll, he co-authored The Official Illustrated NHL History.

Praise For Out of the Clouds: The Unlikely Horseman and the Unwanted Colt Who Conquered the Sport of Kings…

"Out of the
Clouds
is more than the story of a single horse, a single trainer, and their
unlikely rise. The whole mid-century world of grit and cigars, of prize fights
and thick New York accents--guys and dolls--is in these pages. The book is as
much about the big picture as it is the close-up."—The Wall Street Journal


"The best racetrack books make you fall in love with a horse
and become enthralled with the people around him, and that's exactly what Out of the Clouds does. It's a galloping
tale of a misunderstood horse and horseman who navigated thoroughbred racing
with guts, hunches, and a touch of magic."—Joe Drape, New York Times bestselling author of American Pharoah: The Untold Story of the Triple Crown Winner's Legendary Rise

"I was stunned and pleased by Out of the Clouds... an
engaging story of a man's life, his nature, his wisdom, and the prolonged
success born of talent, dedication, and compassion."—Edward L. Bowen, former editor-in-chief of The Blood-Horse and author of author of 20 books on Thoroughbred racing

"Two of Thoroughbred racing's greatest rags-to-riches
stories--chronicling the rise of trainer Hirsch Jacobs and his champion, Stymie,
from the lowest rungs of the sport to its loftiest peak, the Racing Hall of
Fame--are here woven together in a tale further inhabited and enriched by some
of racing's most legendary gamblers and characters, from high-rolling Arnold
Rothstein to journalist Damon Runyon. Out
of the Clouds
is a colorful, engaging account of their racetrack
world."—William Nack, bestselling author of Secretariat

"A sensational book...When it comes to history and colorful characters, Out of the Clouds is right up there with Seabiscuit, and is as riveting a
racing/history book from start to finish as I have ever read."—Steve Haskin, The Blood-Horse