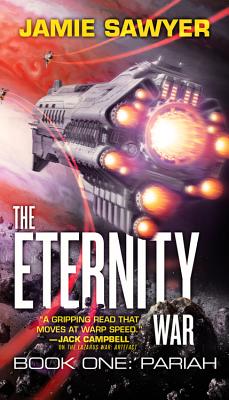 The first novel in a brand-new series from rising SF star Jamie Sawyer, The Eternity War: Pariah is an action-packed adventure set in the same universe as his acclaimed Lazarus War novels.

The soldiers of the Simulant Operations Programme are mankind's elite warriors. Veterans of a thousand battles across a hundred worlds, they undertake suicidal missions to protect humanity from the insidious Krell Empire and the mysterious machine race known as the Shard.

Lieutenant Keira Jenkins is an experienced simulant operative and leader of the Jackals, a team of raw recruits keen to taste battle. They soon get their chance when the Black Spiral terrorist network seizes control of a space station.

Yet no amount of training could have prepared the Jackals for the deadly conspiracy they soon find themselves drawn into -- a conspiracy that is set to spark a furious new war across the galaxy.

Praise For The Eternity War: Pariah…

"Gripping, gritty and unsentimental - Sawyer shows us how perilous future war can be."—Michael Cobley, on The Lazarus War: Artefact

"A hostile race of alien biomechs somewhat in the mould of H. R. Giger aliens . . . terrorism, subterfuge and traitors . . . starships sporting particle beam weapons, railguns the size of skyscrapers, laser batteries, missiles . . . And then there are the uber-human super-soldiers clad in powered armour and wielding plasma weapons . . . Is that enough for you? . . . This, dear readers, is the good stuff. Recommended."—Neal Asher, author of the Agent Cormac novels, on The Lazarus War: Artefact

"A highly promising science fiction debut - a fun, gripping adventure story, with a mystery at its core that kept me turning the pages."—Gary Gibson on The Lazarus War: Artefact

"This novel is fast-paced and stimulating, grabbing the reader at the beginning and never letting go."—Booklist

Jamie Sawyer was born in 1979 in Newbury, Berkshire. He studied Law at the University of East Anglia, Norwich, acquiring a Master's degree in human rights and surveillance law. Jamie is a full-time barrister, practicing in criminal law. When he isn't working in law or writing, Jamie enjoys spending time with his family in Essex. He is an enthusiastic reader of all types of SF, especially classic authors such as Heinlein and Haldeman.
Loading...
or
Not Currently Available for Direct Purchase