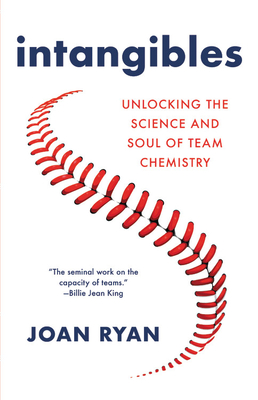 Unlocking the Science and Soul of Team Chemistry

From baseball to biology, an award-winning journalist highlights the power of team chemistry in this "terrific" data-driven investigation of human relationships (Billie Jean King).
Does team chemistry actually exist? Is there scientific or mathematical proof? Is team chemistry as real and relevant as on-base percentages and wins above replacement?
In Joan Ryan's groundbreaking book we discover that the answer to all of the above is a resounding yes. As Ryan puts it, team chemistry, or the combination of biological and social forces that boosts selfless effort among more players over more days of a season, is what drives sports teams toward a common goal, encouraging the players to be the best versions of themselves. These are the elements of teams that make them "click," the ones that foster trust and respect, and push players to exceed their own potential when they work well together.
Team chemistry alone won't win a World Series, but talent alone won't win it, either. And by interviewing more than 100 players, coaches, managers, and statisticians, as well as over five years of extensive research in neuroscience, biology, physiology, and psychology, Ryan proves that the social and emotional state of a team does affect performance. Grit, passion, selflessness, and effort matter -- but never underestimate the power of chemistry.

Praise For Intangibles: Unlocking the Science and Soul of Team Chemistry…

"A book
mixing the deeply emotional with the highly technical, presented with the kind
of sensitive, authoritative touch readers came to expect from Ryan."—San Francisco Chronicle

"With her exhaustive research and breezy prose, Ryan has created something unique and lasting."—The Athletic

"Ever since the wave of analytics began to dominate decision-making in baseball, many insiders have been worried that human connections were being marginalized and stripped out of the game. In a compelling way, Intangibles settles the debate about the merits and validity of the role team chemistry plays in enhancing individual, and ultimately team performance."—Vince Gennaro, President of the Societyfor American Baseball Research (SABR) and Associate Professor at the NYU TischInstitute for Sports Management, Media, and Business

"Fascinating mix of reportage and clinical research...Ryan's cogent, persuasive effort will give sports fans much food for thought."—Publishers Weekly

"Nuanced...complex...All of this makes for a mind-opening study that extends far
beyond the confines of any ballpark."—Booklist

"Team chemistry is real
and it impacts performance. Now we know the why and the how. With terrific storytelling and deep research into the
science of human relationships, Joan Ryan has delivered the seminal work on the
capacity of teams - in sports, business or otherwise - to summon the
best from one another.''—Billie Jean King,founder of the Billie Jean King Leadership Initiative

"Team
chemistry is no longer valued in baseball today, which is a big mistake. It is
crucial for every team; it is critical to winning. Joan Ryan explains what team
chemistry actually is and how it affects performance in this fascinating and
important book. The voices in here are powerful. This should be required
reading for every general manager of every major league team.''—Tim Kurkjian, seniorbaseball writer/analyst, ESPN

"In this entrancing book, Joan Ryan goes on a deep dive into both the human brain and the locker room and delivers a compelling, surprising look at the nature of team chemistry, and its dramatic impact on the sports we love. Outstanding work."—Rob Neyer, author of Powerball

"In a laboratory, chemistry can be defined. But when it comes to personal and team dynamics, chemistry is among the things about which it can be said: "I can't define it, but I know it when I see it." While a precise definition will always be elusive, Joan Ryan's lively, thoughtful, and carefully reported book brings us much closer to an understanding of what team chemistry is and can be."—Bob Costas

"Joan Ryan writes the
way we all wish we could: clearly, simply and powerfully, with nothing wasted.
Intangibles is a sports book but it's really a mystery. In a time when players
are reduced to assets and data, Joan returns the people to the room. How they
interact - or don't - is so much of why we watch. This really is a terrific
book."—HowardBryant, author of The Last Hero: A Life of Henry Aaron