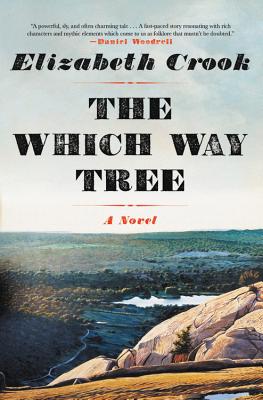 The Which Way Tree

The poignant odyssey of a tenacious young girl who braves the dangers of the Texas frontier to avenge her mother's death.

Early one morning in the remote hill country of Texas, a panther savagely attacks a family of homesteaders, mauling a young girl named Samantha and killing her mother, whose final act is to save her daughter's life. Samantha and her half brother, Benjamin, survive, but she is left traumatized, her face horribly scarred.

Narrated in Benjamin's beguilingly plainspoken voice, The Which Way Tree is the story of Samantha's unshakeable resolve to stalk and kill the infamous panther, rumored across the Rio Grande to be a demon, and avenge her mother's death. In their quest she and Benjamin, now orphaned, enlist a charismatic Tejano outlaw and a haunted, compassionate preacher with an aging but relentless tracking dog. As the members of this unlikely posse hunt the panther, they are in turn pursued by a hapless but sadistic Confederate soldier with troubled family ties to the preacher and a score to settle.

In the tradition of the great pursuit narratives, The Which Way Tree is a breathtaking saga of one steadfast girl's revenge against an implacable and unknowable beast. Yet with the comedic undertones of Benjamin's storytelling, it is also a timeless tale full of warmth and humor, and a testament to the enduring love that carries a sister and brother through a perilous adventure with all the dimensions of a legend.

"A ripping adventure [with] a show-stopping finale."-Wall Street Journal

"The stuff of legends."-Attica Locke

Praise For The Which Way Tree…

"A multilayered tale . . . Benjamin Shreve, the teenage narrator of The Which Way Tree, unspools his tale of Civil War-era Texas in a voice that is utterly convincing, consistent, and believable. Crook never slips out of that voice for a moment. This is no small feat given that the tale involves Benjamin's demented half sister, the infamous massacre of Union-sympathizing German immigrants by local Confederates, and a giant panther. Any first-person voice involving a young Southern boy invites comparisons to Huck Finn. But dialects have complexities and Crook appears to be a master of them. Benjamin's voice swings between the rhythms of the Southern hills and the lofty, elevated tone encountered in Twain and contemporary Westerns . . . His speech can switch from hyperbole to understatement in the same sentence--and it is a wonderfully deadpan understatement . . . The language is arresting . . . The Which Way Tree is a commendable and very readable addition to the tale-spinning tradition and its beautiful use of language."—Paulette Jiles, New York Times Book Review

"A ripping adventure...Benjamin is a boyishly charming chronicler of the crazed hunt...Samantha's unfinished business leads the makeshift hunters through a gauntlet of disasters to the novel's show-stopping finale. 'Vengeance belongs to the Lord,' the preacher chides her, to which she answers, 'Only if he can beat me to it.'"—Sam Sacks, Wall Street Journal

"An absorbing coming-of-age novel...Benjamin is a keen observer and reliable narrator...These adventure tales, if told well, are plenty riveting and enduring. The Which Way Tree is told well."—Rod Davis, Texas Observer

"Crook manages in The Which Way Tree the striking feat of not only capturing the voice of a 19th century youth as honestly and compellingly as Mark Twain but also having her Texas Huck recount a Moby Dick-like pursuit across Texas in which the White Whale is a malevolent mountain lion and its Ahab is a girl it mauled while killing her mother."—Austin Chronicle

"In the tradition of Charles Portis's classic True Grit, Elizabeth Crook's heart-pounding adventure, The Which Way Tree, features a tough-as-nails orphan in pursuit of frontier justice...you'll follow Sam to the ends of the earth."—Natalie Beach, O Magazine

"Crook's slim,
intimate novel illustrates how, at their best, historical westerns provide
insight into human nature tested by the sort of extreme conditions that rarely
crop up in contemporary American settings."—Texas Monthly

"How Crook managed to channel the voice of a seventeen-year-old boy in 1860s Texas so convincingly I can't say, but Benjamin is both persuasive and captivating, a fully realized character that you gladly follow across the Lone Star State. In his youth and lack of education and simple, declarative voice, he calls to mind another figure from nineteenth-century American literature, Huck Finn. Benjamin shares Huck's keen eye for observing human nature and teasing out some sense of what it means. His voice is another way in which Crook grips the reader, and may be the novel's secret weapon . . . Like some of the finest books that came out of our nation's first century and a quarter, The Which Way Tree leads us into the wild, where characters must confront both the wildness in nature and the wildness in their own nature. That which is in Sam's heart has the awesome force of a thunderstorm-or a mountain lion-and can no more be tamed than either of them can. But Elizabeth Crook has at least wrestled hers onto the page and lets us get close to it, close enough for the hairs on our arms to rise. In this remarkable novel, she's given us something wild to wonder at, and to be moved by."—Robert Faires, Austin Chronicle

"This riveting Western has a bit of True Grit feel."—CJ Lotz, Garden & Gun

"The story is intriguing . . . A page-turner."—Mike Yawn, Houston Chronicle

"Samantha is frustrating and, like her brother Benjamin, sometimes I too wanted to strangle her, but I couldn't help but root for her . . . Crook's novel keeps the plot moving fast and the dramatic tension high . . . It's a story that hooked me from the get-go, and when Benjamin finishes his last letter to the judge, I wanted the story to continue . . . Fans of Paulette Jiles's News of the World will be gratified to find another well-told, old-time Texas tale of big adventure and big characters."—Emily Spicer, San Antonio Express News

"The Which Way Tree is adventurous, suspenseful, and charming...you're going to want to read this one."—Elizabeth Entenman, HelloGiggles

"The Which Way Tree is unlike anything I've read before...an enthralling adventure, a Texas fairy tale in the truest sense of that term."—Michelle Newby, Lone Star Literary Life

"When I began to read this book its unique voice
appealed to me immediately. Elizabeth Crook has written a beautiful novel with
wonderful characters."—Robert Duvall

"Elizabeth Crook has invented a brilliant way of
seeing the old Texas frontier: at very close range, through the eyes of a
wise-beyond-his-years seventeen-year-old boy and the sister whose defiant quest
he joins. The result is a small-scale masterwork, richly detailed and
beautifully rendered."—S. C. Gwynne, New York Times bestselling authorof Empire of the Summer Moon

" 'Preacher Dob said, Vengeance belongs to the Lord, Samantha. She said, Only if he can beat me to it.' This told me everything I needed to know about Samantha Shreve, a character who knocked my socks off from her first appearance on the page. This book is the stuff of legends, tales told for a hundred years around Texas campfires. Written in a form that is historically accurate and yet feels painstakingly intimate, The Which Way Tree is unlike anything I've read before."—Attica Locke, author of Bluebird, Bluebird

"The Which Way Tree is one part Track of the Cat, one part True Grit, and one part Tom Sawyer, a ruthless pedigree for a novel that displays human nature in its most beautiful form--a marvel."—Craig Johnson, New York Times bestselling author of TheWestern Star, a Walt Longmire mystery

"In The Which Way Tree, Elizabeth Crook has conjured a powerful, sly, and often charming tale delivered in the winning voice of Benjamin. This novel is a fast-paced story resonating with rich characters and mythic elements that come to us as folklore that mustn't be doubted."—Daniel Woodrell, author of Winter's Bone and The Maid's Version

"Elizabeth
Crook has created a book of marvels. Its comedy is steeped in the hardscrabble
tragedies of a wilder old America. You will even catch an echo of Twain's wit
in the picaresque narration."—Luis Alberto Urrea, author of the national bestseller The Hummingbird'sDaughter

"Not since True Grit have I read a novel this charming, exciting, suspenseful, and pitch-perfect. The Which Way Tree is winning from first page to last."—Ron Hansen, authorof The Kid and The Assassination of Jesse James by the Coward RobertFord

"Recalls Cormac McCarthy's horseback meandering and keen eye for terrain and flora in The Crossing. There are also obvious echoes of True Grit, though Sam is even more fiercely single-minded than Mattie . . . An entertaining picture of harsh, stark life in the Old West."—Kirkus Reviews

"This is a story of unremitting deprivation allayed by unexpected kindness, with a dangerous chase motivated by love and suffused with humanity."—Michele Leber, Booklist

While hunting near his Texas home at the end of the Civil War, Benjamin Shreve witnesses a Confederate soldier,Clarence Hanlin, picking the pockets of eight hanged men. The 17-year-old orphan is called to court to testify about what he saw. In letters to the judge, Benjamin tells the epic tale of the panther that killed his stepmother and disfigured his stepsister, Samantha. Clarence plays a bizarre role in the tale, helping and hindering Samantha's Ahab-like quest forvengeance against the panther. Benjamin, frank and quick-witted, tells a story that is absorbing and satisfying. Hedoesn't dwell on his hardships but focuses on Samantha's single-minded pursuit of the panther and the cold-bloodedsoldier who ended up in the middle of it all. VERDICT: Spur-Award-winning Crook's (The Night Journal; Monday, Monday) fifth novel will be a must-read for fans of Joe Lansdale's Western adventures and Patrick deWitt's The Sisters Brothers. Readers new to the Western genre will be hooked if they start with this compelling novel.—Emily Hamstra, Library Journal

Elizabeth Crook has published four previous novels, including The Night Journal, which received the Spur Award from Western Writers of America, and Monday, Monday, a Kirkus Reviews Best Book of 2014 and winner of the Jesse H. Jones Award from the Texas Institute of Letters. She lives in Austin with her family.
Loading...
or
Not Currently Available for Direct Purchase