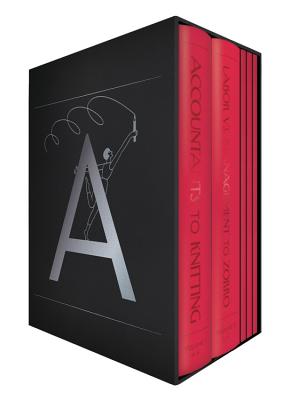 This monumental, two-volume, slip-cased collection includes nearly 10 decades worth of New Yorker cartoons selected and organized by subject with insightful commentary by Bob Mankoff and a foreword by David Remnick.

The is the most ingenious collection of New Yorker cartoons published in book form, The New Yorker Encyclopedia of Cartoons is a prodigious, slip-cased, two-volume, 1,600-page A-to-Z curation of cartoons from the magazine from 1924 to the present. Mankoff -- for two decades the cartoon editor of the New Yorker -- organizes nearly 3,000 cartoons into more than 250 categories of recurring New Yorker themes and visual tropes, including cartoons on banana peels, meeting St. Peter, being stranded on a desert island, snowmen, lion tamers, Adam and Eve, the Grim Reaper, and dogs, of course. The result is hilarious and Mankoff's commentary throughout adds both depth and whimsy. The collection also includes a foreword by New Yorker editor David Remnick. This is stunning gift for the millions of New Yorker readersand anyone looking for some humor in the evolution of social commentary.

"[A] banquet, too rich for any sustained sitting...What distinguishes this present omnibus is its often defiantly offbeat 340-odd categories. You'll find such reassuring groupings as "Commuters," "Desert Island" and "Snowmen."...The New Yorker Encyclopedia of Cartoons is quite the joy."—Wall Street Journal

"Bob Mankoff's brilliant reorganization of nearly 100 years of New Yorker cartoons is a can't-miss. Using the thematic categorization approach that made his Cartoon Bank such a treat, this "encyclopedia" divides the entries into the weirdly recurring tropes like "Beached Whales," "Humpty Dumpty," "Nudism," "Office Life," and of course, meeting "Saint Peter."Mankoff adds come color commentary to tease out common themes throughout. The cartoons themselves are lovingly reprinted in gloriously oversized formats you can fall into. Of course, at 15 pounds this two-volume behemoth is a grand impractical production that needs a table of its own."—Folio

David Remnick is the editor of the New Yorker. He lives in New York City.

Bob Mankoff is a cartoonist and served as the cartoon editor of the New Yorker from 1997-2017. He lives in upstate New York.
Loading...
or support indie stores by buying on