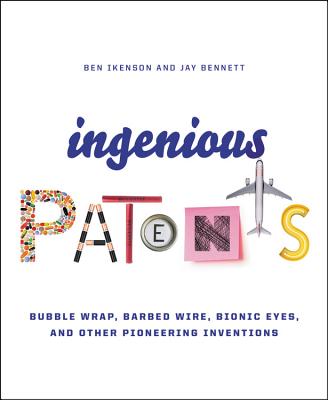 For the curious and the creators, Ingenious Patents tells the fascinating history of the inventors and their creations that have changed our world.
Discover some of the most innovative of the 6.5 million patents that the U.S. Patent and Trademark Office has granted since Thomas Jefferson issued the first one in 1790. Revised and reformatted from the original 2004 edition, Ingenious Patents presents each device along with background about the inventor, interesting sidebars and history, and an excerpt from the original patent application. Author Jay Bennet has also written 15 new entries, everything from iPhones to 3G wireless to CRISPR gene editing. Liberally sprinkled throughout are patent diagrams created by the inventors annotated to show exactly how each item works.

Entries include creative commercial successes in fields as diverse as medicine, aeronautics, computing, agriculture, and consumer goods. Readers are certain to find a topic of interest here, whether it is the history behind the patent for a Pez dispenser, cathode ray tube, kitty litter, DNA fingerprinting, or the design of a Fender Stratocaster guitar.

Jay Bennett, an editor at PopularMechanics.com, has also written for Smithsonian, Popular Science, Outside Magazine, and Major League Baseball. He lives in Brooklyn.