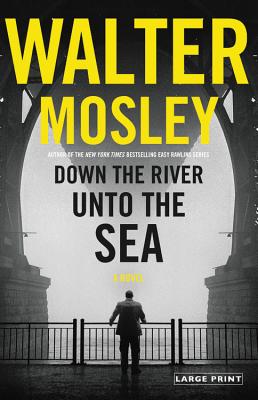 Down the River unto the Sea

Joe King Oliver was one of the NYPD's finest investigators, until, dispatched to arrest a well-heeled car thief, he is framed for assault by his enemies within the NYPD, a charge which lands him in solitary at Rikers Island.

A decade later, King is a private detective, running his agency with the help of his teenage daughter, Aja-Denise. Broken by the brutality he suffered and committed in equal measure while behind bars, his work and his daughter are the only light in his solitary life. When he receives a card in the mail from the woman who admits she was paid to frame him those years ago, King realizes that he has no choice but to take his own case: figuring out who on the force wanted him disposed of -- and why.

Running in parallel with King's own quest for justice is the case of a Black radical journalist accused of killing two on-duty police officers who had been abusing their badges to traffic in drugs and women within the city's poorest neighborhoods.

Joined by Melquarth Frost, a brilliant sociopath, our hero must beat dirty cops and dirtier bankers, craven lawyers, and above all keep his daughter far from the underworld in which he works. All the while, two lives hang in the balance: King's client's, and King's own.

Praise For Down the River unto the Sea…

"Walter Mosley is back with a whole new character to love. . . . As gorgeous a novel as anything he's ever written. And with Joe King Oliver I'm betting, and hoping, he's given us a character we haven't see the last of."—Richard Lipez, Washington Post

"A wild ride that delivers hard-boiled satisfaction while toying with our prejudices and preconceptions . . . The darker and uglier the story gets, the more Joe King Oliver comes alive. . . . The journey is fun and joyful. . . . A fitting work for a world riddled with dark contradiction."—Steph Cha, Los Angeles Times

"Down the River Unto the Sea is a well-constructed crime novel, urgent in its plotting and carefully observed in the behaviors and the voices of its supporting cast. Mosley makes it all look simple, creating in Joe King Oliver another fascinatingly flawed detective brimming with potential."—Michael Berry, San Francisco Chronicle

"This is one of those books that leaves you a little breathless--not only while you're reading, but once the back cover's closed, too. For anyone who loves hard-bitten PI thrillers, reading Down the River unto the Sea couldn't be more right."—Teri Schlichenmeyer, Miami Times

"Rekindles some of the remarkable energy that drove the early Rawlins novels. . . . Mosley writes with great power here about themes that have permeated his work: institutional racism, political corruption, and the ways that both of these issues affect not only society at large but also the inner lives of individual men and women. And he has created a new hero in Joe Oliver with the depth and vulnerability to sustain what readers will hope becomes a new series. . . . It's the perfect moment for Mosley to unveil an exciting new hero and a series set in the present and confronting the issues that drive today's headlines."—Booklist (starred review)

"[An] excellent standalone . . . The novel's dedication--to Malcolm, Medgar, and Martin--underlines the difference that one man can make in the fight for justice."—Publishers Weekly (starred review)

"A heady stew of racial politics and seedy characters that Mosley's fans are sure to eat up."—AARP

"It's Mosley's signature style--rough-hewn, rhythmic, and lyrical--that makes you ready and eager for whatever he's serving up. . . . Let the good times roll."—Kirkus Reviews

"Mosley's poetic descriptions of not only New York City but his character's deepest souls elevate the story to beauty. Although the characters, large and small, are all compelling, in the end it is King's story to tell, as he struggles to decide how much he's willing to risk to get the truth."—Strand Magazine

"Mosley's newest standalone has the markings of a classic hard-boiled New York novel... It's also a poignant page-turner whose larger themes--corruption, institutional racism, and the horrors of solitary confinement--speak to some of today's most pressing issues."—Charles Perry, LitHub

"[An] engaging standalone . . . Mosley fans will welcome another imaginative page-turning from a mystery grand master."—Library Journal

"As always, Mosley weaves racial tensions into his thrilling work, complicated by Oliver’s friends and coworkers turning against him."—Bookriot