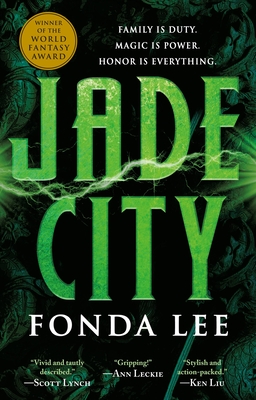 In this World Fantasy Award-winning novel of magic and kungfu, four siblings battle rival clans for honor and power in an Asia-inspired fantasy metropolis.


Jade is the lifeblood of the island of Kekon. It has been mined, traded, stolen, and killed for -- and for centuries, honorable Green Bone warriors like the Kaul family have used it to enhance their magical abilities and defend the island from foreign invasion.

Now, the war is over and a new generation of Kauls vies for control of Kekon's bustling capital city. They care about nothing but protecting their own, cornering the jade market, and defending the districts under their protection. Ancient tradition has little place in this rapidly changing nation.

When a powerful new drug emerges that lets anyone -- even foreigners -- wield jade, the simmering tension between the Kauls and the rival Ayt family erupts into open violence. The outcome of this clan war will determine the fate of all Green Bones -- and of Kekon itself.

"An epic drama reminiscent of the best classic Hong Kong gangster films but set in a fantasy metropolis so gritty and well-imagined that you'll forget you're reading a book." --Ken Liu, Hugo, Nebula, and World Fantasy Award-winning author

"Stylish and action-packed, full of ambitious families and guilt-ridden loves, Jade City is an epic drama reminiscent of the best classic Hong Kong gangster films but set in a fantasy metropolis so gritty and well-imagined that you'll forget you're reading a book."—Ken Liu, winner of the Hugo, Nebula, and World Fantasy Awards

"Jade City has it all: a beautifully realized setting, a great cast of characters, and dramatic action scenes. What a fun, gripping read!"—Ann Leckie, author of the Hugo, Nebula, and Arthur C. Clarke Award winning novel Ancillary Justice

"Lee draws on her Chinese heritage, passion for gangster stories, and strong writing to launch a Godfather-inspired fantasy series that mixes bold martial-arts action and vivid worldbuilding. The result is terrific."—Library Journal (Pick of the Month, starred review)

"As this ambitious and complex story unfolds, Lee (Exo) skillfully juggles a huge cast. Her action scenes are flashy, brutal, and cinematic, while the family dynamics hold their own weight and significance. This is an engaging blend of crime drama and Asian martial arts film tropes.... an intense, satisfying experience."—Publishers Weekly

"Intricate, fast-moving, and brazen, Jade City elevates the fantasy crime novel to something really special. A sharp and insightful new voice."—Elizabeth Bear, winner of the Hugo and Locus Awards

"With a powerful family of complex characters -- including my favorite, Kaul Shaelinsan -- Jade City beckons readers to secret family meetings and public battles between warring clans. With magical jade at stake, winning the battle for control of a city has never been more important, or more dangerous. Fonda Lee's first adult novel is a fast-hitting, tantalizing, sometimes unsettling, and always insightful book with a wealth of power at its core. A modern-day epic."—Fran Wilde, award-winning author of Updraft, Cloudbound, and Horizon

"Lee has a supreme talent for world-building.... Jade City is a fierce, energetic and stylish story that will keep you engrossed from start to end."—Culturefly

"How does a book make me giddy and heartbroken at the same time? Jade City delivers intrigue, family drama, and martial arts magic that feels absolutely real."—Mary Robinette Kowal

"Fast cars, brilliant characters, and gangster kung-fu! Swift, intricate, and vicious as a talon knife, Fonda Lee's Jade City will pull you into a world of deft intrigue, hard choices, and bloody loyalty. Lee's written the postcolonial Godfather hiding under the surface of the Avatar: the Last Airbender universe -- and it's a fantastic read."—Max Gladstone, Hugo Award-nominated author of the Craft Sequence

"An atmospheric, gritty noir tale of family loyalties, martial arts and power struggles in a city that feels so real it becomes a character in its own right. Jade City is epic drama writ large."—Aliette de Bodard, winner of the Nebula, Locus, and British Science Fiction Awards

"If you like extremely tense political maneuvering and intrigue, you will love Jade City. Fonda Lee is the new Mario Puzo; Jade City has officially dethroned The Godfather."—Sarah Gailey, Hugo and Campbell Award finalist

"An absolutely blistering read. The characters are perfectly three dimensional. The plot is thrilling and the action sequences are damn near perfect.... I cannot recommend Jade City highly enough."—The Eloquent Page

"Dynamic fight scenes and vibrant world-building bring to life this sharp, memorable story of a family caught up in a ferocious gang war."—Kate Elliott

"I'm going to have to read Jade City again, slowly, to fully take in all the Cool Stuff, because the story dragged me through by the scruff of the neck. What a ride! I love this book."—Steven Brust

"A sweeping saga of ambition, loyalty, and family in a gritty, densely-imagined island city. Fonda Lee explores the tension between what is owed to family, country, and yourself in a high-stakes, high-octane game of power and control."—p.p1 {margin: 0.0px 0.0px 0.0px 0.0px; font: 14.0px Calibri; -webkit-text-stroke: #000000}span.s1 {font-kerning: none}Tina Connolly, Nebula-nominated author of Ironskin

"Exquisite writing, explosive fighting -- Jade City is as rich and deadly as the Green Bones warriors who stalk its pages. I tore through this book like bullets through a fine restaurant in hotly disputed territory."—Heidi Heilig

"Propulsive plot.... A world that will be hard to forget."—B&N Sci-Fi & Fantasy Blog

"An intriguing confluence of history, culture, and biology.... It'll be interesting to see what course Lee charts next."—Kirkus

Fonda Lee is the World Fantasy Award-winning author of Jade City and the award-winning YA science fiction novels Zeroboxer, Exo, and Cross Fire. Born and raised in Canada, Lee is a black belt martial artist, a former corporate strategist, and action movie aficionado who now lives in Portland, Oregon with her family.
Loading...
or support indie stores by buying on