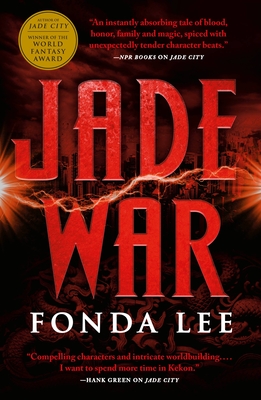 The Kaul siblings' battle with rival clans reaches new heights in the heart-pounding continuation of the Green Bone Saga, an epic trilogy about family, honor, and those who live and die by the ancient laws of blood and jade.

On the island of Kekon, the Kaul family is locked in a violent feud for control of the capital city and the supply of magical jade that endows trained Green Bone warriors with supernatural powers they alone have possessed for hundreds of years.

Beyond Kekon's borders, war is brewing. Powerful foreign governments and mercenary criminal kingpins alike turn their eyes on the island nation. Jade, Kekon's most prized resource, could make them rich - or give them the edge they'd need to topple their rivals.

Faced with threats on all sides, the Kaul family is forced to form new and dangerous alliances, confront enemies in the darkest streets and the tallest office towers, and put honor aside in order to do whatever it takes to ensure their own survival—and that of all the Green Bones of Kekon.

Praise for the Green Bone Saga:

"Lee has upped her game in this novel, with deeper, more nail-biting intrigue and stunning, heart-pumping action scenes. Her character development is pitch-perfect."―Booklist

"Sweeping, leisurely, and epic, and combines political intrigue with sharply choreographed action scenes, but it's a character-driven family drama at its heart.... The increasingly complex narrative continually ups the stakes. This worthy continuation of the larger story line delivers a satisfying tale and sets the stage for the next installment."—Publishers Weekly (starred review)

"[Lee] juggles the personal and the epic with deft, admirable skill, weaving a story that is equally sweeping and intimate; a magical, almost operatic crime and family drama that feels all the more true because all of her jade-fueled supermen (and women) come with human hearts that bend and break the same as ours.—NPR

"Jade City has it all: a beautifully realized setting, a great cast of characters, and dramatic action scenes. What a fun, gripping read!"—Ann Leckie, author of the Hugo, Nebula, and Arthur C. Clarke Award winning novel Ancillary Justice

"Stylish and action-packed, full of ambitious families and guilt-ridden loves, Jade City is an epic drama reminiscent of the best classic Hong Kong gangster films but set in a fantasy metropolis so gritty and well-imagined that you'll forget you're reading a book."—Ken Liu, winner of the Hugo, Nebula, and World Fantasy Awards

"Lee has upped her game in this novel, with deeper, more nail-biting intrigue and stunning, heart-pumping action scenes. Her character development is pitch-perfect."—Booklist

"Lee effortlessly injects more complexity into an already-rich universe.... Lee proves she's still a master at mafia-magic storytelling, and this second volume is deeper and more ambitious than the first."—BookPage

"Intricate, fast-moving, and brazen, Jade City elevates the fantasy crime novel to something really special. A sharp and insightful new voice."—Elizabeth Bear, winner of the Hugo and Locus Awards

"With a powerful family of complex characters -- including my favorite, Kaul Shaelinsan -- Jade City beckons readers to secret family meetings and public battles between warring clans. With magical jade at stake, winning the battle for control of a city has never been more important, or more dangerous. Fonda Lee's first adult novel is a fast-hitting, tantalizing, sometimes unsettling, and always insightful book with a wealth of power at its core. A modern-day epic."—Fran Wilde, award-winning author of Updraft, Cloudbound, and Horizon

"How does a book make me giddy and heartbroken at the same time? Jade City delivers intrigue, family drama, and martial arts magic that feels absolutely real."—Mary Robinette Kowal

"Fast cars, brilliant characters, and gangster kung-fu! Swift, intricate, and vicious as a talon knife, Fonda Lee's Jade City will pull you into a world of deft intrigue, hard choices, and bloody loyalty. Lee's written the postcolonial Godfather hiding under the surface of the Avatar: the Last Airbender universe -- and it's a fantastic read."—Max Gladstone, Hugo Award-nominated author of the Craft Sequence

"An atmospheric, gritty noir tale of family loyalties, martial arts and power struggles in a city that feels so real it becomes a character in its own right. Jade City is epic drama writ large."—Aliette de Bodard, winner of the Nebula, Locus, and British Science Fiction Awards

"If you like extremely tense political maneuvering and intrigue, you will love Jade City. Fonda Lee is the new Mario Puzo; Jade City has officially dethroned The Godfather."—Sarah Gailey, Hugo and Campbell Award finalist

"Dynamic fight scenes and vibrant world-building bring to life this sharp, memorable story of a family caught up in a ferocious gang war."—Kate Elliott on Jade City

"A sweeping saga of ambition, loyalty, and family in a gritty, densely-imagined island city. Fonda Lee explores the tension between what is owed to family, country, and yourself in a high-stakes, high-octane game of power and control."—p.p1 {margin: 0.0px 0.0px 0.0px 0.0px; font: 14.0px Calibri; -webkit-text-stroke: #000000}span.s1 {font-kerning: none}Tina Connolly, Nebula-nominated author of Ironskin, on Jade City

"Exquisite writing, explosive fighting -- Jade City is as rich and deadly as the Green Bones warriors who stalk its pages. I tore through this book like bullets through a fine restaurant in hotly disputed territory."—Heidi Heilig

Fonda Lee is the World Fantasy Award-winning author of Jade City and the award-winning YA science fiction novels Zeroboxer, Exo, and Cross Fire. Born and raised in Canada, Lee is a black belt martial artist, a former corporate strategist, and action movie aficionado who now lives in Portland, Oregon with her family.
Loading...
or support indie stores by buying on