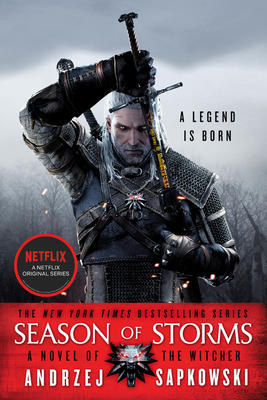 Season of Storms (The Witcher)

Before he was the guardian of Ciri, the child of destiny, Geralt of Rivia was a legendary swordsman. Join the Witcher as he undertakes a deadly mission in this stand-alone adventure set in the world that inspired the hit Netflix show and the blockbuster video games.

Geralt of Rivia is a Witcher, one of the few capable of hunting the monsters that prey on humanity. A mutant who is tasked with killing unnatural beings. He uses magical signs, potions, and the pride of every Witcher—two swords, steel and silver.

But a contract has gone wrong, and Geralt finds himself without his signature weapons. Now he needs them back, because sorcerers are scheming, and across the world clouds are gathering.

The season of storms is coming. . .


Look out for The Tower of Fools, book one of Andrzej Sapkowski's Hussite Trilogy, available now!

Hussite Trilogy
The Tower of Fools

Praise For Season of Storms (The Witcher)…

"This is a series you can sink your teeth into."BuzzFeed News

"Delightful, intense, irreverent, and compelling....you have to read The Witcher books because they are rife with all of the elements that make you love fiction, and especially fantasy, in the first place....In a word, The Witcher delivers."Hypable

"The universe of Sapkowski's The Witcher is one of the most detailed and best-explored in modern fantasy, offering endless opportunities for fresh ideas ... Complex character relationships enrich this already complex world; this is the sort of series fantasy fans will cherish."B&N on Tower of Swallows

"One of the best and most interesting fantasy series I've ever read. Though it functions well as adventure fiction, it has added depth and value as satire and commentary on fantasy literature ... Sapkowski is a genuine stylist."Nerds of a Feather on Baptism of Fire

"Like a complicated magic spell, a Sapkowski novel is a hodgepodge of fantasy, intellectual discourse, and dry humor. Recommended."Time on Blood of Elves

"Like Mieville and Gaiman, [Sapkowski] takes the old and makes it new ... fresh take on genre fantasy."Foundation on The Last Wish

"Sapkowski has a phenomenal gift for narrative, inventing sensational events, creating a suggestive mood, and building up the suspense along with a dazzling, slightly cynical sense of humor."Jacek Sieradzki, Polityka on The Last Wish

"Sapkowski's The Last Wish is a great collection of short stories centered around a witcher, Geralt - a rare sorcerous breed who hunts down the monstrous but is feared by the innocent. With a wondrous mix of Eastern European folklore and myth, beautiful princesses, mischievous demons and where all is not as it seems, The Last Wish is a great read - perfect for dipping into or just reading cover to cover, as I did."Waterstones on The Last Wish

"It is [his] world-weariness combined with his battle-honed powers that make Geralt such an interesting character. Here's hoping The Last Wish is merely the opening chapter in his English language adventures."Edge on The Last Wish

"I really, really enjoyed this book ... None of the characters in Sapkowski's world are black or white; they are all shades of grey, including Geralt and the monsters."The Deckled Edge on The Last Wish

"Sapkowski is very good at creating interesting, imaginative characters with unusual levels of depth to them ... The Last Wish is an enjoyable book full of stories both melancholy and comic."The Wertzone on The Last Wish

"New battle mechanics, a fantastic storyline, and a gritty setting make The Witcher one of the most engrossing, mature RPGs to arrive on the PC in years."Gamespot.com on The Witcher video game

"The Witcher delivers one of the most intense and rewarding role-playing experiences this year."GT Reviews on The Witcher video game

"The Lady of the Lake is, without any doubt, the best and most profound fantasy novel I have ever read. It is hard to put down, yet also a challenging and deeply rewarding book. And it is genuinely moving. I have never read a fantasy series like this, and suspect I never will again."Nerds of a Feather on The Lady of the Lake

Andrzej Sapkowski was born in 1948 in Poland. He studied economy and business, but the success of his fantasy cycle about the sorcerer Geralt of Rivia turned him into a bestselling writer. He is now one of Poland's most famous and successful authors.
Loading...
or support indie stores by buying on