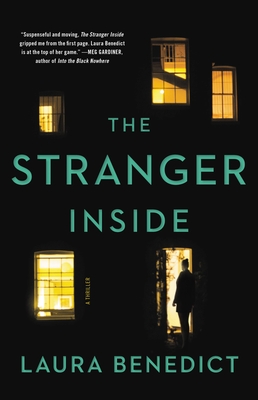 A woman returns home to find a stranger living in her house in this "suspenseful and moving" psychological drama from an Edgar Award-nominated author (Meg Gardiner) -- perfect for readers of Shari Lapena and Liane Moriarty.
There's a stranger living in Kimber Hannon's house. He tells the police that he has every right to be there, and he has the paperwork to prove it. But Kimber definitely didn't invite this man to move in. He tells her that he knows something about her, and he wants everyone else to know it, too.
"I was there. I saw what you did." These words reveal a connection to Kimber's distant past, and dark secrets she'd long ago left buried. This trespasser isn't after anything as simple as her money or her charming Craftsman bungalow. He wants to move into her carefully orchestrated life -- and destroy it.

Praise For The Stranger Inside…

"Suspenseful and moving, The Stranger Inside gripped me from the first page. Laura Benedict is at the top of her game."—Meg Gardiner, author of Into the Black Nowhere

"Reads at breakneck speed; perfect for a thrilling distraction from the everyday.... Fans of Laura Benedict will find themselves stunned by the new depths to her writing this stand-alone unleashes; those coming to her work fresh will almost certainly be instant fans for life."—BOLO Books

"The Stranger Inside is a twisty, compelling thriller. Laura Benedict takes hold of your throat and doesn't let go until the final page."
—Jeff Abbott, New York Times bestselling author of The Three Beths

"Can you imagine the nightmare of a stranger taking over your house? The terror you would feel? With The Stranger Inside, Laura Benedict turns her unique voice in suspense to this elegant scary mystery, where nothing is as it seems and one woman's truth is shattered by the hidden secrets of her past."—J.T. Ellison, New York Times bestselling author of Lie to Me

"The Stranger Inside is an intense, fascinating character study that will have you rooting for Kimber while she turns her life around and tries to stay alive."
—Catherine Coulter, New York Times bestselling author of Paradox

"Benedict spins a story driven by deceit on the part of most of the principals, with tension increasing with the body count and the twists and turns that continue to the very end."—Booklist

"Laura Benedict's The Stranger Inside begins with one of the most unnerving premises I've ever read. This is a masterfully constructed thriller about one woman's inability to escape from the complicated web of her past. You won't be able to put it down until every secret is revealed, one breathtaking surprise after another, all the way until the shocking final pages."—David Bell, USA Today bestselling author of Somebody's Daughter

"Compelling characters, lush settings, complex emotions--all in a clever plot and spiced with a hint of darkness. These are the trademarks of Laura Benedict's writing. I've followed her career for years and she never disappoints. This new book, The Stranger Inside, is no exception. But a warning--once you pick it up, you will yield your life to the power of a great storyteller."—Carolyn Haines, bestselling author of the Sarah Booth Delaney mysteries and The House of Memory

Laura Benedict is the Edgar- and ITW Thriller Award- nominated author of eight novels of mystery and suspense, including The Stranger Inside, and the Bliss House gothic trilogy. Her short fiction has appeared in Ellery Queen's Mystery Magazine, and in numerous anthologies like At Home in the Dark (May 2019), A Thousand Doors, and St. Louis Noir. A native of Cincinnati, she lives in Southern Illinois with her family.
Loading...
or
Not Currently Available for Direct Purchase