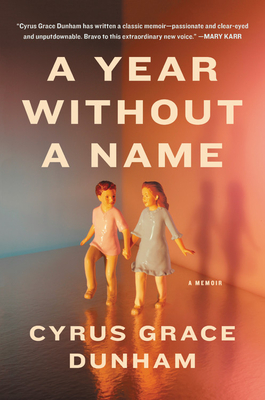 A Year Without a Name

How do you know if you are transgender? How do you know if what you want and feel is real? How do you know whether to believe yourself? Cyrus Dunham’s life always felt like a series of imitations—lovable little girl, daughter, sister, young gay woman. But in a culture of relentless self-branding, and in a family subject to the intrusions and objectifications that attend fame, dissociation can come to feel normal.

A Lambda Literary Award finalist, Dunham’s fearless, searching debut brings us inside the chrysalis of a transition inflected as much by whiteness and  proximity to wealth as by gender, asking us to bear witness to an uncertain and exhilarating process that troubles our most basic assumptions about identity. Written with disarming emotional intensity in a voice uniquely his, A Year Without a Name is a potent, thrillingly unresolved meditation on queerness, family, and selfhood.


Praise For A Year Without a Name: A Memoir…

"Cyrus Grace Dunham is such a tender, open, and nuanced writer, and his book allows itself to be messy and complicated in the name of unflinching honesty. A stunning account of both longing and belonging, A Year Without a Name made every corner of my heart sing."—Hanif Abdurraqib, New York Times bestsellingauthor of THEY CAN'T KILL US UNTIL THEY KILL US and GO AHEAD IN THE RAIN

"A work of extraordinarily intimate confession rendered in startling, sparkling -- and addictive -- prose. With erudition, frankness, and eloquence, Dunham braids a propulsive narrative momentum together with exquisite particulars of daily life. This book, simply put, summons a private and deeply pleasurable exchange with its reader. In the grand tradition, it keeps us company."—Jordy Rosenberg,author of CONFESSIONS OF THE FOX

"A Year Without a Name is staggering, intimate, and astonishing; you can't help but be awed by the end of it. I'm grateful for the journey this memoir took me on, for what Dunham illuminates about loving ourselves and others."—Bryan Washington, author of LOT

"Cyrus Grace Dunham's memoir is unflinching. His unsettlement about gender is profound, his writing about it genuine and affecting. A Year Without a Name let me travel with Dunham on his difficult, sometimes treacherous, sometimes beautiful, always memorable path."—Lynne Tillman, author of MEN AND APPARITIONS

"Dunham's deeply felt, forthright, lucid accounting of the complex process of determining who they are is astonishing in its intimacy and generosity, and serves as a reminder of how difficult, but how necessary, it is to be honest with ourselves about who we know ourselves to be."
—Kristen Iversen, NYLON

"Not all memoirists reckon with themselves as severely and provocatively as Dunham does, particularly when it comes to the weight, responsibility, and, at times, unwanted consequences of a name...A Year Without a Name teaches us that gender identity and names are not as static as we might have thought. In fact, both are more like the process of self-discovery - slippery, complicated, ongoing."—BUSTLE

"CyrusGrace Dunham has written a complicated, necessary addition to the transliterary canon. Readers get to know Cryus as Dunham getsto know Cyrus, and the memoir makes clear that one's journey to figuring outtheir gender is a messy, life-long process."—ADVOCATE

"In a scant 176 pages, Dunham pens a surprisingly
wide existential exploration of what it means to be human; an honest, beautiful
memoir that isn't afraid to live in the unknown."—SarahNeilson, LitHub

Cyrus Grace Dunham is a writer and organizer living in Los Angeles. A Year Without a Name is their first book.
Loading...
or
Not Currently Available for Direct Purchase