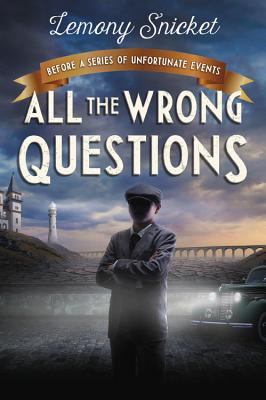 All the Wrong Questions

Question 1: Also Published as "Who Could That Be at This Hour?"

Before the Baudelaires became orphans, before he encountered A Series of Unfortunate Events, even before the invention of Netflix, Lemony Snicket was a boy discovering the mysteries of the world. Read the account of it all, in the debut volume of The New York Times bestselling series, available now with an intriguing new title and look.

In the first of four volumes, Lemony Snicket recounts the time he spent as a young man in a fading town under the care of a dubious chaperone. Navigating the mysteries of childhood can be difficult, and for Lemony Snicket, the tangled plots that surround him include a missing father, a flooding basement, suspiciously young taxi drivers, a stolen statue, a peculiar librarian, and more information than is necessary about a secret organization.

Penned in signature style, All the Wrong Questions: Question 1 (originally published as "Who Could That Be at This Hour?") invites you to untangle the mysteries that surround young Lemony Snicket.

Praise For All the Wrong Questions: Question 1: Also Published as "Who Could That Be at This Hour?"…

"The sort of goodie savored by brainy kids who love wordplay, puzzles and plots that zing from point A to B by way of the whole alphabet."—The Washington Post