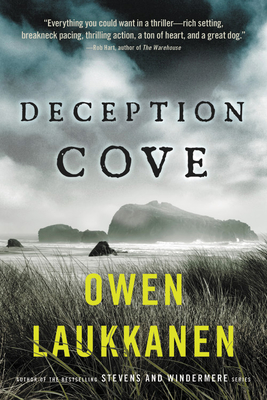 A rescue dog, an ex-Marine, and an ex-convict are caught in the crosshairs of a ruthless gang in remote Washington state in this "first-rate thriller" (Associated Press) for "fans of CJ Box and Michael Koryta" (Booklist).

After fifteen years behind bars, Mason Burke owns one set of clothes, a wallet, and a photo of Lucy, the service dog he trained while in prison. Seeking a fresh start, he sets a course for Washington state, where the dog lives with Jess Winslow—widow, former US Marine, and PTSD survivor.

With one knock on Jess’s door, Mason lands in the midst of a standoff: Deputy Kirby Harwood has seized Lucy and threatens to destroy her unless Jess turns over the contraband that her late husband stole from under the deputy’s nose.

The last thing Mason wants is to be dragged back into the criminal world. The last thing Jess wants is to trust a stranger. But neither of them can leave a friend, the only good thing in either of their lives, in danger. To rescue Lucy, they’ll have to conquer their fears, forge an uneasy alliance, and fight back—before all three of them become collateral damage in someone else’s private war.

"SUPERB... A FIRST-RATE THRILLER with plenty of action that Laukkanen masterfully controls while also delving deep into the personas of Jess and Mason."
—Associated Press

"A promising beginning to a new series . . . Fans of C.J. Box and Michael Koryta will enjoy the authenticity of this gut-wrenching story."
—Booklist

"I could write pages singing the praises of Deception Cove's vivid characters and ruthless pace--but here's the short version: Owen Laukkanen sure as hell knows how to tell a story. Read this one, you won't regret it."
—Nick Petrie, national bestselling author of The Drifter

"Owen Laukkanen is a powerhouse writer, and Deception Cove cements that fact. Sharp, compelling, and loaded with a thriving setting and a conflicted, relatable protagonist -- this is a harrowing story of redemption that feels intimate and cinematic at the same time. A must-read."—Alex Segura, author of Blackout

"In Deception Cove, Owen Laukkanen gives you everything you could want in a thriller -- rich setting, breakneck pacing, thrilling action, a ton of heart, and a great dog. This is a cancel-your-plans-so-you-can-stay-in-to-read book."—Rob Hart, author of The Warehouse

Owen Laukkanen's Stevens and Windermere novels have been nominated for the Anthony, Barry, Edgar, and Thriller Awards. A graduate of the University of British Columbia's Creative Writing program, Laukkanen spent three years in the world of professional poker reporting before turning to fiction. He currently lives in Vancouver with his dog, Lucy.
Loading...
or support indie stores by buying on