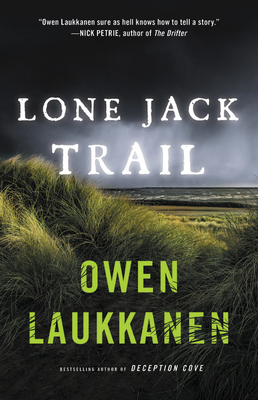 A veteran Marine and an ex-convict find themselves on opposite sides of the law in this propulsive new thriller from award-nominated suspense master and "damn fine storyteller" Owen Laukkanen (Kirkus Reviews).

Could your closest friend be a killer?

When a body washes up outside Deception Cove, Washington, Jess Winslow-once a US Marine, now a trainee sheriff's deputy-is assigned to investigate. But when she realizes it's "Bad" Brock Boyd, a hometown celebrity lately fallen from grace, things become complicated. The last person seen with Boyd was her own boyfriend, Mason Burke.

An ex-convict and newcomer in town, Mason is one of the only people who can understand Jess's haunting memories of her time in Afghanistan-and her love for Lucy, her devoted service dog. Finding one another in Deception Cove has been the best thing to happen to either of them in years. So Jess knows Mason could never be guilty of murder-doesn't she?

As the facts of the case point ever more squarely at Mason, Jess must face that everything she thinks she knows about him might be wrong. A thrilling sequel to Deception Cove, and a heart-pounding adventure all its own, Lone Jack Trail pushes Jess and Mason to a shocking confrontation and will test everything they've come to love and trust in Deception Cove.

“They complement each other perfectly: the veteran’s toughness, the ex-con’s humanity, and the dog’s unconditional adoration of both. All of Laukkanen’s crime novels have tense action and layered characters.”—Kirkus Reviews (starred review)

“Laukkanen excels at showing the strength and resilience of people going through the worst time of their lives in his excellent second novel… Lone Jack Trail is rich storytelling at its best — and with a really great dog. This is a series that will only get better."
—South Florida Sun-Sentinel

PRAISE FOR OWEN LAUKKANEN
"Owen Laukkanen sure as hell knows how to tell a story." —Nick Petrie, national bestselling author of The Drifter

"Owen Laukkanen is a powerhouse writer... Intimate and cinematic at the same time. A must-read."—Alex Segura, author of Blackout

"In Deception Cove, Owen Laukkanen gives you everything you could want in a thriller -- rich setting, breakneck pacing, thrilling action, a ton of heart, and a great dog. This is a cancel-your-plans-so-you-can-stay-in-to-read book."—Rob Hart, author of The Warehouse

Owen Laukkanen's Stevens and Windermere novels have been nominated for the Anthony, Barry, Edgar and Thriller Awards. A graduate of the University of British Columbia's Creative Writing program, Laukkanen spent three years in the world of professional poker reporting before turning to fiction. He currently lives in Vancouver with his dog, Lucy.
Loading...
or support indie stores by buying on