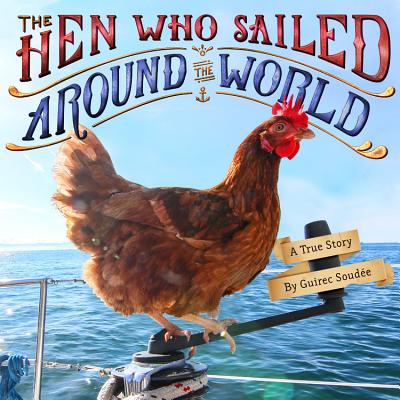 The Hen Who Sailed Around the World (Hardcover)

Meet Monique! In this true story, online phenomenon Guirec Soudée shares his adventures both unbelievable and heartwarming, sailing around the world with his brave, affectionate red hen, Monique.

Monique is a highly accomplished chicken: she surfs, she skateboards, and she just crossed the world on a tiny boat with her human companion, Guirec, who helped steer. On their three-year journey, together they were unstoppable. When they became stranded in the ice off Greenland for four months, Monique, unruffled as always, kept Guirec alive with her eggs-- and they both made it home.

Guirec and Monique are irresistible as unlikely comrades and friends taking on the world, and Guirec documented their journey with his remarkable, comical photographs. A deeply touching portrait of the real-life bond between animals and the humans who love them as well as a thrilling survival story, The Hen Who Sailed Around the World is an adventure for the ages.

Guirec Soudée sails around the world on his yacht Yvinec accompanied by a red hen called Monique. At age 22, he crossed the Atlantic Ocean alone. At 23, he went 130 days without assistance stuck in ice near Greenland. At 24, he became the youngest navigator in the world to cross the Northwest Passage alone! He and Monique are currently crossing the Pacific Ocean.
or support indie stores by buying on
Copyright © 2020 American Booksellers Association