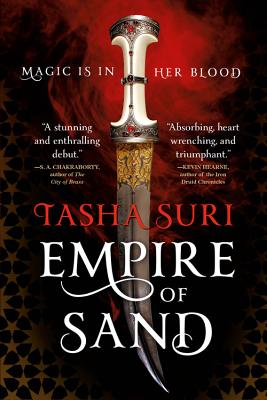 Empire of Sand (The Books of Ambha)

*Named one of TIME's Top 100 Fantasy Books Of All Time

And should she fail, the gods themselves may awaken seeking vengeance. . .

"An ode to the quiet, fierce strength of women. . .pure wonder." —Samantha Shannon, New York Times bestselling author of The Priory of the Orange Tree

"Stunning and enthralling." —S. A. Chakraborty, USA Today bestselling author of The City of Brass

By Tasha Suri:
The Books of Ambha duology
Empire of Sand
Realm of Ash


Praise For Empire of Sand (The Books of Ambha)…

"Empire of Sand draws you into an intricately realized world of blood and secrets. An arresting and magical history told through the eyes of an indomitable heroine.I cannot ask for more."—Jeannette Ng

"Opens up a rich new world…Mehr’s underdog story will feel familiar, but her unique powers and Suri’s creative world-building heighten the stakes."—Raisa Bruner, TIME’s 100 Best Fantasy Books of All Time