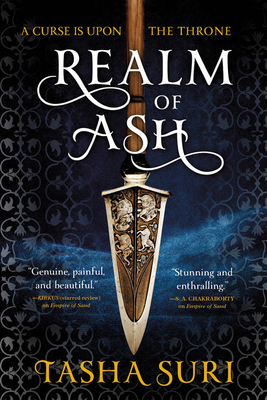 Realm of Ash (The Books of Ambha)

The fate of an empire rests in the hands of a young woman with magical blood and nothing left to lose, and an outcast prince determined to save his family at any cost, in this "dark, melodious, and memorable" new fantasy (Library Journal, starred review) from the author of Empire of Sand.
The Ambhan Empire is crumbling. A terrible war of succession hovers on the horizon. The only hope for peace lies in the mysterious realm of ash, where mortals can find what they seek in the echoes of their ancestors' dreams. But to walk there requires a steep price.
Arwa is determined to make the journey. Widowed by a brutal massacre, she's pledged service to the royal family and will see that pledge through to the end. She never expected to be joined by Zahir, the disgraced, illegitimate prince who has turned to forbidden magic in a desperate bid to save those he loves.
Together, they'll walk the bloody path of their shared past. And it will call into question everything they've ever believed...including whether the Empire is worth saving at all.
"Those with a penchant for lyrical prose, intricate world building, beautifully imagined characters, [and] compelling immersive folklore...need look no further." -- Booklist (starred review)

Praise For Realm of Ash (The Books of Ambha)…

"A poignant story of finding one's place in a world warped by prejudice, court intrigue, violence, and sorcery....Those with a penchant for lyrical prose, intricate world building, beautifully imagined characters, compelling immersive folklore, and a fascinating look into a setting reminiscent of the Mughal Empire need look no further."—Booklist (starred review) on Realm of Ash

"Suri's companion to Empire of Sand continues to expand on the stark beauty and power of this magical realm. With striking characters and court intrigue, this story is dark, melodious, and memorable."—Library Journal (starred review) on Realm of Ash

"Sumptuous."—Publishers Weekly on Realm of Ash

"[A] feast of desert magic, palace intrigue, forbidden romance and veiled princesses making all their own hard choices. ... For all the imaginative scope and fresh worldbuilding, the heart of Suri's series beats in the chests of its indomitable heroines. Their every struggle and sacrifice, triumph and fear, resonate more deeply than the fates of whole worlds in less personal fantasies."—Shelf Awareness on Realm of Ash

"Suri takes us back to Ambha with Realm of Ash, an equally lush and tender narrative ... Realm of Ash is about anger as allowed - and how anger gets things done. Which makes both books, I think, stories that we deeply, deeply need right now."—Strange Horizons on Realm of Ash

"An ode to the quiet, fierce strength of women...pure wonder." —Samantha Shannon on Empire of Sand

"A stunning and enthralling debut that thoroughly swept me away....A quiet, powerful and unexpected love story set in a crushing world of magic and tyrants, Empire of Sand is a gripping tale."—S. A. Chakraborty on Empire of Sand

"A darkly intricate, devastating, and utterly original story about the ways we are bound by those we love."—R. F. Kuang on Empire of Sand

"Tasha Suri's beautiful prose, with its undercurrent of warm tenderness, hides a web of escalating tension and existential dread. By the time the spider appears, Empire of Sand will have you in its grip and you won't be able to put it down."—Peter V. Brett on Empire of Sand

"Genuine, painful, and beautiful. A very strong start for a new voice."—Kirkus (starred review) on Empire of Sand

"A brilliant debut that shows us a rich, magical world with clear parallels to this one...absorbing, heart wrenching, and triumphant. Highly recommended."—Kevin Hearne on Empire of Sand

"A lush, atmospheric and sweeping epic fantasy, a powerful story of resistance and love in the face of terrifying darkness. You'll want to devour Empire of Sand."—Aliette de Bodard on Empire of Sand

"Empire of Sand draws you into an intricately realized world of blood and secrets. An arresting and magical history told through the eyes of an indomitable heroine.I cannot ask for more."—Jeannette Ng on Empire of Sand

"The best fantasy novel I have read this year. I loved it!"—Miles Cameron on Empire of Sand

"Empire of Sand is astounding. The desert setting captured my imagination, the magic bound me up, and the epic story set my heart free."—Fran Wilde on Empire of Sand

"Riveting and wonderful! A fascinating desert world, a compelling heroine, and a richly satisfying conclusion. Empire of Sand will sweep you away!"—Sarah Beth Durst on Empire of Sand

"A lovely dark dream full of wrenching choices and bittersweet triumph. This gorgeous, magic-woven story and its determined heroine spin hope from hopelessness, power from powerlessness, and love from desolation."—Melissa Caruso on Empire of Sand

Tasha Suri was born in London to Punjabi parents. She studied English and Creative Writing at Warwick University, and is now a cat-owning librarian in London. A love of period Bollywood films, history, and mythology led her to write South Asian-influenced fantasy. Find her on Twitter @tashadrinkstea.
Loading...
or support indie stores by buying on