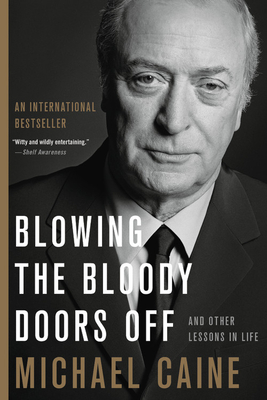 Blowing the Bloody Doors Off

And Other Lessons in Life

Now in his 85th year, Hollywood legend Michael Caine shares wisdom and stories from his remarkable career in this "engrossing" memoir that "shines with positive energy" (Library Journal, starred review).

One of our best-loved actors, Michael Caine has starred in over 100 films in his six-decade career, spanning classic movies like Alfie, Zulu, and The Italian Job (the inspiration for the book title) to playing Alfred opposite Christian Bale's Batman in Christopher Nolan's blockbuster Dark Knight trilogy. Caine has excelled in every kind of role--with a skill that's made it look easy.

Caine knows what success takes. He's made it to the pinnacle of his profession from humble origins. But as he says, "Small parts can lead to big things. And if you keep doing things right, the stars will align when you least expect it." Still working and more beloved than ever, Caine now shares everything he's learned-and "his fans will be rewarded, as will anyone seeking an enjoyable, inspirational read" (Library Journal).

Praise For Blowing the Bloody Doors Off: And Other Lessons in Life…

"Caine the raconteur provides exactly what an admiring
reader would want from the cockney-born Hollywood vet.... The great stuff is when
he recalls his days in swinging 1960s England."—New York Times Book Review


"Caine melds candid anecdotes and a master class on
acting into an upbeat, unpretentious, and star-studded memoir.... Warm
recollections and practical advice from an acclaimed star."—Kirkus Reviews


"Caine reflects on an
exceptional life on and off stage and shares pertinent advice and poignant
observations in a dishy and anecdotal rumination. Caine's pithy but passionate
counsel can be applied to nearly any situation. Gracious, generous, and humble,
this consummate professional is a generous advocate for creating a fulfilling
and contented life."—Booklist

"With exceptional wit and flair, Academy Award winner
Caine recounts his fascinating personal and professional journey. Engrossing
anecdotes.... Caine speaks of his failures and successes with humility and humor,
perceptively explaining that the lessons he learned apply both to aspiring
actors and the general public-how to be fully prepared, make the most of every
opportunity, achieve balance, deal with aging, and find the good in any
experience. This well-written narrative shines with positive energy and
provides a fine overview of the actor's life and the screen and stage.... Caine's
is a life well lived and well told. His fans will be rewarded, as will anyone
seeking an enjoyable, inspirational read."—Library Journal (starred review)


"Witty and wildly entertaining.... Caine offers star-studded anecdotes
about the realities of being a working actor and life on and off the
sets.... This solidly entertaining memoir doesn't have a single dull
page."—Shelf Awareness


"A chatty and engaging read."—Sunday Times, Books of the Year

"National treasure Michael Caine shares the wisdom, insight and skills life has taught him, all with his fabulous storytelling."—Prima

Sir Michael Caine CBE has been Oscar-nominated six times, winning his first Academy Award for the 1986 film Hannah and Her Sisters and his second in 1999 for The Cider House Rules. He has starred in over one hundred films, becoming well-known for several critically acclaimed performances including his first major film role in Zulu in 1964, followed by films including The Ipcress File, Get Carter, Alfie, The Italian Job, Dirty Rotten Scoundrels, and Educating Rita, and more recently The Dark Knight, Is Anybody There?, and Harry Brown. He was appointed a CBE in 1992 and knighted in 2000 in recognition of his contribution to cinema.

Married for more than thirty years, with two daughters and three grandchildren, he and his wife Shakira live in London and Surrey.
or support indie stores by buying on