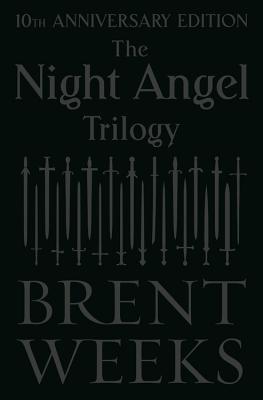 This special 10th anniversary edition celebrates the blockbuster assassin fantasy series that launched New York Times bestselling author Brent Weeks' career, includes The Way of Shadows, Shadow's Edge, and Beyond the Shadows.
For Durzo Blint, assassination is an art - and he is the city's most accomplished artist.
For Azoth, survival is just the beginning. He was raised on the streets and knows an opportunity when he sees one - even when the risks are as high as working for someone like Durzo Blint.
Azoth must learn to navigate the assassins' world of dangerous politics and strange magics - and become the perfect killer.
The Night Angel TrilogyThe Way of ShadowsShadow's EdgeBeyond the Shadows
Night Angel: The Complete Trilogy (omnibus)Perfect ShadowThe Way of Shadows: The Graphic Novel
For more from Brent Weeks, check out:
LightbringerThe Black Prism
The Blinding Knife
The Broken Eye
The Blood Mirror

"What a terrific story! I was mesmerized from start to finish. "Unforgettable characters, a plot that kept me guessing, non-stop action and the kind of in-depth storytelling that makes me admire a writer's work."
—Terry Brooks

Brent Weeks was born and raised in Montana. He wrote on bar napkins and lesson plans before landing his dream job years and thousands of pages later. Brent lives in Oregon with his wife, Kristi, and their daughters. Find out more about the author at www.brentweeks.com or on twitter @brentweeks.
Loading...
or
Not Currently Available for Direct Purchase