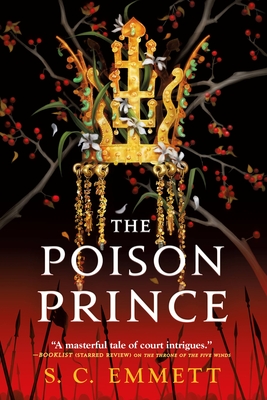 The Poison Prince (Hostage of Empire #2)

A woman's desire for revenge draws her deeper into a treacherous imperial court in this sweeping and richly detailed second book of an East Asian-inspired epic fantasy series.

The crown princess has been assassinated, reigniting tensions between her native Khir and the great Zhaon empire. Now, Komor Yala, her lady-in-waiting, is alone in a foreign court, a pawn for imperial schemes.

To survive and avenge her princess, Yala will have to rely on unlikely allies like the sly Third Prince and the war-hardened general who sacked her homeland. But as the Emperor lies upon his deathbed, the palace is more dangerous than ever before―for there are six princes and only one throne.

The drums of war beat again in this epic tale of ambition, honor, and sacrifice, perfect for fans of The Tiger's Daughter and The Grace of Kings.

Praise for the Hostage of Empire:

"Intricate, elegant and sharp as a blade―The Throne of the Five Winds is sweeping political fantasy at its finest." ―Tasha Suri, author of The Jasmine Throne


Praise For The Poison Prince (Hostage of Empire #2)…

"With a deliberate pace and fine attention to details of dress and custom, Emmett weaves a masterful tale of court intrigues."—Booklist (starred review) on Throne of the Five Winds

"Brimful of thrilling palace drama and menacing court intrigue."—Kate Elliott, author of Black Wolves on Throne of the Five Winds

"Action and intrigue takes place within a layered and beautifully realized fantasy world that will appeal to readers of Evan Winter's The Rage of Dragons and K. Arsenault Rivera's The Tiger's Daughter."—B&N Sci-Fi & Fantasy Blog on Throne of the Five Winds

S. C. Emmett is a pseudonym for a New York Times bestselling author.
Loading...
or
Not Currently Available for Direct Purchase