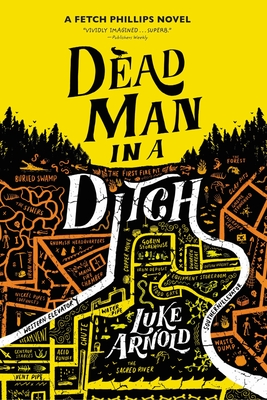 Dead Man in a Ditch (The Fetch Phillips Novels #2)

In this brilliant sequel to actor Luke Arnold's debut The Last Smile in Sunder City, a former soldier turned PI solves crime in a world that's lost its magic. The name's Fetch Phillips -- what do you need? Cover a Gnome with a crossbow while he does a dodgy deal? Sure. Find out who killed Lance Niles, the big-shot businessman who just arrived in town? I'll give it shot. Help an old-lady Elf track down her husband's murderer? That's right up my alley. What I don't do, because it's impossible, is search for a way to bring the goddamn magic back. Rumors got out about what happened with the Professor, so now people keep asking me to fix the world. But there's no magic in this story. Just dead friends, twisted miracles, and a secret machine made to deliver a single shot of murder. Welcome back to the streets of Sunder City, a darkly imagined world perfect for readers of Ben Aaronovitch and Jim Butcher.

Praise for Dead Man in a Ditch:

"Superb... With a lead who would be at home in the pages of a Raymond Chandler or James Ellory novel and a nicely twisty plot, this installment makes a strong case for Arnold's series to enjoy a long run." ―Publishers Weekly

"Arnold's universe has everything, including the angst of being human. The perfect story for adult fantasy fans—a tough PI and a murder mystery wrapped around the mysticism of Hogwarts, sprinkled with faerie dust." ―Library Journal (starred review)

"A marvelous noir voice; Arnold has captured the spirit of the genre perfectly and wrapped it around a fantasy setting with consummate skill."—Peter McLean, author of Priest of Bones on The Last Smile in Sunder City

"[T]he focus on meticulous worldbuilding and highly detailed backstory as well as the cast of fully developed and memorable characters are unarguable strengths....The first installment of an effortlessly readable series that could be the illegitimate love child of Terry Pratchett and Dashiell Hammett."—Kirkus on The Last Smile in Sunder City

"A richly imagined world...Winningly combining the grit of Chinatown with the quirky charm of Harry Potter, this series opener is sure to have readers coming back for more."—Publishers Weekly (starred review) on The Last Smile in Sunder City

"This off-piste detective story set in a magical world, now in meltdown, has verve and charm in abundance and a rough diamond hero with quite a story to tell."—Andrew Caldecott, author of Rotherweird on The Last Smile in Sunder City

Luke Arnold was born in Australia and has spent the last decade acting his way around the world, playing iconic roles such as Long John Silver in the Emmy-winning Black Sails and his award-winning turn as Michael Hutchence in the INXS mini-series Never Tear Us Apart. When he isn't performing, Luke is a screenwriter, director, novelist, and ambassador for Save the Children Australia.
Loading...
or support indie stores by buying on