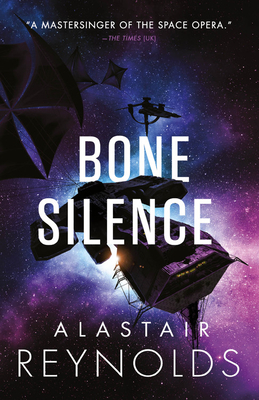 The thrilling finale to the Revenger Trilogy tells a desperate tale of greed, piracy, shadow governments, and ancient secrets that could unravel all of civilization
The Ness sisters ran away from home to become the most fearsome pirates in the twenty thousand worlds of the Congregation. They've plundered treasures untold, taken command of their own ship, and made plenty of enemies. But now they're being hunted for crimes they didn't commit by a fleet whose crimes are worse than their own. To stay one step ahead of their pursuers and answer the questions that have plagued them, they'll have to employ every dirty, piratical trick in the book....
Read more by Alastair Reynolds!
The Revenger Trilogy:
Revenger
Shadow Captain
Bone Silence

Alastair Reynolds was born in Barry, South Wales, in 1966. He studied at Newcastle and St. Andrews Universities and has a Ph.D. in astronomy. he stopped working as an astrophysicist for the European Space Agency to become a full-time writer. Revelation Space and Pushing Ice were shortlisted for the Arthur C. Clarke Award; Revelation Space, Absolution Gap, Diamond Dogs, and Century Rain were shortlisted for the British Science Fiction Award, and Chasm City won the British Science Fiction Award.

"This wonderfully complicated, fascinating space opera carries on the adventures of teen sisters Adrana and Arafura Ness, who find themselves over their heads in deep space intrigue... [A] marvelous mix of character study and space adventure."—Publishers Weekly (starred review)

"Shadow Captain does what a great sequel should do: it builds upon, rather than replicates, the earlier work while escalating the drama and upping the stakes. ... The worlds'-shattering conclusion has us very much looking forward to our next voyage with the Ness sisters."—B&N Sci-Fi and Fantasy Blog

"The sequel to last year's space heist story, Revenger, is an equally-gripping story about two sisters, Adrana and Fura Ness, on the hunt for the greatest treasure in the universe."—Kirkus

"A swashbuckling thriller--Pirates of the Caribbean meets Firefly--that nevertheless combines the author's trademark hard SF with effective, coming-of-age characterization."
—The Guardian on Revenger


"Revenger is classic Reynolds-that is to say, top of the line science fiction, where characters are matched beautifully with ideas and have to find their place in a complex future. More!"—Greg Bear on Revenger

"Alastair
Reynolds [is] one of the leading lights of the New Space Opera Movement . . . .
Revenger is tremendous fun."

"Reynolds has sketched in a galaxy littered with the relics of former civilizations (human and alien), with plenty left to the reader's imagination, and room for a sequel."—Library Journal on Revenger

"An expert mix of the fantastical and horrific."—Publishers Weekly (starred review) on Revenger

"By far the most enjoyable book Reynolds has ever written."—SFX on Revenger