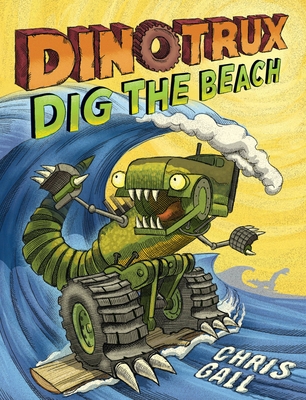 The third book in the original, rip-roaring mash-up of dinosaurs and trucks that inspired the Netflix TV series!

Fed up with steamy summertime Jurassic jungles, the mighty monsters are getting hot and grumpy, and they need a vacation.... Time to roll on down to the beach! Tyrannosaurus Trux might be able to "hang ten" on his surfboard, but not all of the trux feel so at home near the water. Can they organize their skills to dig up the beach and build the best sandcastle ever? Dive into the silliest, splashiest Dinotrux adventure yet to find out!

Praise For Dinotrux Dig the Beach…

Praise for Dinotrux Dig the Beach:
"Children will love seeing their own seaside activities... carried out by the Dinotrux.... Fans of the earlier books will want to accompany the Dinotrux on this beach adventure."
—School Library Journal

"A masterful combination of childish enthusiasm and rough, tough machines.... sure to have listeners in stitches and looking for more dino fun. Readers won't want to wait to find out where the Dinotrux will go next."—Kirkus Reviews

"The writing is sharp and has some very funny one-liners that both kids and adults will love.... Both admirers of construction trucks and dinosaur-lovers will enjoy."—Booklist

Praise for Revenge of the Dinotrux:
* "Gall's dinosaur/machine mash-ups are, once again, the star of the show, commanding attention (and generating laughs) in every action-filled, rust-toned scene."—Publishers Weekly, starred review

"Young fans of all things big and noisy will make trax for this dynamic dino-diversion."
—Kirkus Reviews

"Chock full of personality.... This is sure to be a winner with elementary readers."—Library Media Connection

*
"This title will be hard to keep on the shelves."—School Library Journal, starred review

*
"Dinotrux ruled their world, now they're likely to rule this one too.
Bellow on!"—Kirkus Reviews, starred review