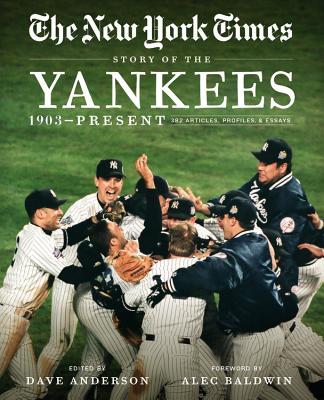 Experience a century of the pride, power, and pinstripes of the Yankees, Major League Baseball's most successful team, as told through the stories of their hometown newspaper, The New York Times.

The New York Yankees are the most storied franchise in baseball history. They consistently draw the largest home and away crowds of any team, command the largest broadcast audiences in baseball, draw the greatest number of on-line followers, and routinely sell more copies of books and magazines than any other professional sports team.

The New York Times Story of the Yankees includes more than 350 articles chronicling the team's most famous milestones -- as well as the best writing about the ball club. Each article is hand-selected from The Times by the peerless sportswriter Dave Anderson, creating the most complete and compelling history to date about the Yankees.

Organized by era, the book covers the biggest stories and events in Yankee history, such as the purchase of Babe Ruth, Roger Maris's 61st home run, and David Cone's perfect game. It chronicles the team's 27 World Series championships and 40 American League pennants; its rivalries with the Brooklyn Dodgers and the Boston Red Sox; controversial owners, players, and managers; and more. The articles span the years from 1903 -- when the team was known as the New York Highlanders -- to the present, and include stories from well-known and beloved Times reporters such as Arthur Daley, John Kieran, Leonard Koppett, Red Smith, Tyler Kepner, Ira Berkow, Richard Sandomir, Jim Roach, and George Vecsey.

Hundreds of black-and-white photographs throughout capture every era. A foreword by die-hard Yankees fan, Alec Baldwin, completes the celebration of baseball's greatest team.

The New York Times is regarded as the world's preeminent newspaper. Its news coverage is known for its exceptional depth and breadth, with reporting bureaus throughout the United States and in twenty-six foreign countries.

Dave Anderson was one of the leading American sportswriters of our time. He began writing for the New York Times in 1966 and was given his own column in 1971. He was inducted into the National Sports Writers and Sportscasters Hall of Fame in 1990. Dave passed away in 2018.

Bill Pennington is a journalist, sportswriter, and author. He has been a reporter for the New York Times since 1997, best known for his sports journalism on golf, skiing, baseball, football, and other sports. In 2015, Pennington authored the New York Times bestseller Billy Martin: Baseball's Flawed Genius. He lives in Warwick, New York with his wife, Joyce, and three children.
or
Not Currently Available for Direct Purchase
Copyright © 2020 American Booksellers Association