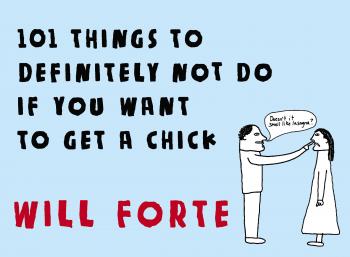 From the creator and star of Fox's hit comedy The Last Man on Earth, star of the cult film Macgruber, and beloved Saturday Night Live alum, a hilariously absurd cartoon gift book offering a wry commentary on modern relationships.

In this outrageously funny and oddly wise guide to relationships, forty-five-year-old bachelor Will Forte shares his bulletproof advice for attracting-and retaining-a romantic partner of the fairer sex. Told in the form of 101 hand-drawn rules of thumb, the book takes on all the questions men are dying to know the answers to but are too afraid to ask: What activities are acceptable and not acceptable to do with a romantic interest's father? What animals, if any, should never be incorporated into foreplay? Should I claim to have collaborated with a famous poet? Combining wisdom, both practical and not, with idiosyncratic drawings so simple that even a romantically frustrated man-child could understand them, 101 Things to Definitely Not Do If You Want to Get a Chick gracefully answers these questions and ninety-eight others.

"In this dating advice book, the first in what he tells me will be a series of three hundred advice books that will probably then be made into movies, Will Forte explores romantic relationships with more nuance and tenderness than you would expect if you've ever met him.

For decades to come, readers will be asking, 'What exactly was wrong with Will Forte?'

I couldn't love him more if I were paid to.*

*it's none of your business if I was."—Tina Fey

"This is the
perfect book. Silly-dumb, easy to read and funny. Say good-bye to Charles
Dickens."—David Letterman

"Like the author, this book manages to walk that fine line between creepy and funny."
—Amy Poehler

"I'm often asked, 'Who do you think the funniest of them all?' and I always answer, 'It's you, Will.' This book proves why."
—Martin Short

"An indispensable
text from our nation's leading expert in not getting chicks."—Seth Meyers

"Will Forte has
the type of mind that, when studied in a lab, lights up in different colors
than a regular person's. In everyday wake mode, he's accessing parts of his
brain that are usually only triggered by a lightning strike, an influx of
serotonin, or most likely, a salt deficiency. Whatever it is, I hope he keeps
thinking outside the outside of the box, because an original like Will needs to
be celebrated, protected, pruned, and given ample sunlight and water."—Paul Rudd

"Will Forte is a weird dude...It takes courage to be that strange...He is also funny as hell."
—Hollywood legend Jack Black

"Will Forte is an American treasure. Like, in the way that those dudes with metal detectors at the beach say that old cans they find are treasure. It's all about perspective, really."
—Andy Samberg

Will Forte is an award-winning American actor, comedian, writer, producer and voice actor. He is best known for his work in television as a cast member on Saturday Night Live, and as the creator and star of the sitcom The Last Man on Earth. He lives in Los Angeles.
Loading...
or
Not Currently Available for Direct Purchase