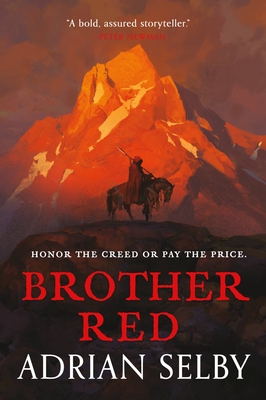 From one of the most exciting voices in dark fantasy comes a sweeping story of a soldier on a brutal quest to preserve her kingdom’s future.

She was their hope, their martyr, their brother.…

Driwna Marghoster, a soldier for the powerful merchant guild known as the Post, is defending her trade caravan from a vicious bandit attack when she discovers a dead body hidden in one of her wagons. Born of the elusive Oskoro people, the body is a rare and priceless find, the center of a tragic tale, and the key to a larger mystery.

As she investigates who the body was meant for, Driwna finds herself on a path paved by deceit and corruption…and it will lead her to an evil more powerful than she can possibly imagine.
"Adrian Selby’s Brother Red proves to be a thrilling fantasy epic about love, loyalty, and the importance of protecting people in need....this novel is a true page turner in its entirety."—The Nerd Daily Also by Adrian SelbySnakewoodThe Winter Road

"Selby demonstrates the command of style, character, plotting, and world building of a seasoned author."—Booklist on Snakewood

"Teyr's ambition and endurance are admirable, her goal is refreshingly mundane and pragmatic, and Selby has crafted a deeply imagined world."—Publishers Weekly on The Winter Road

"Not your typical grimdark fantasy....While it's a complex tale, this is also an immensely readable one, and should appeal to fans of the immersive world-building of Brandon Sanderson. Selby constructs his world on a personal, visceral level, making sure we feel everything that happens to the narrators."—B&N SciFi and Fantasy Blog on Snakewood

Adrian Selby studied creative writing at university before embarking on a career in video game production. He worked for several big-name studios as a producer before settling down to more conventional work in IT project management. He is a Tolkien fanatic and online gaming addict, and lives with his wife and family on the south coast of England.
Loading...
or support indie stores by buying on
(This book is on backorder)