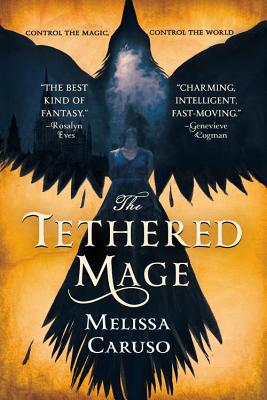 The Tethered Mage (Swords and Fire #1)

A mage with coveted magic and the scion of a powerful family are magically bound together in service to the Empire in the first book of a spellbinding fantasy trilogy from David Gemmell Award-nominated author Melissa Caruso.

Magic is scarce in the Raverran Empire, and those born with such powers are strictly controlled -- taken as children and conscripted into the Falcon army, to be used as weapons in times of war.

Zaira has lived her life on the streets to avoid this fate, hiding her mage mark and thieving to survive. But hers is a rare and dangerous magic, one that threatens the entire Empire.

Lady Amalia Cornaro was never meant to be a Falconer. Heiress and scholar, she was born into a treacherous world of political machinations.

But fate has bound the heir and the mage. And as war looms on the horizon, a single spark could turn their city into a pyre.

Praise for Swords and Fire:

"Charming, intelligent, fast-moving, beautifully atmospheric, with a heroine and other characters whom I really liked as people. I couldn't put it down."―Genevieve Cogman, author of The Invisible Library

"Breathtaking... Worth every moment and every page, and should make anyone paying attention excited about what Caruso will write next."―BookPage

"A riveting read, with delicious intrigue, captivating characters, and a brilliant magic system. I loved it from start to finish!"―Sarah Beth Durst, author of The Queen of Blood

For more from Melissa Caruso, check out:

Rooks and Ruin
The Obsidian Tower


Praise For The Tethered Mage (Swords and Fire #1)…

"Charming, intelligent, fast-moving, beautifully atmospheric, with a heroine and other characters whom I really liked as people. I couldn't put it down (I overstayed my lunch break in order to finish it.) I would love to read more set in this world."—Genevieve Cogman, author of The Invisible Library

"The Tethered Mage is the best kind of fantasy: intricate world-building, the most intriguing of court intrigues, and a twisty plot. But while readers might pick it up for those elements, they'll stay for the engaging characters and the unlikely friendships at the story's heart."—Rosalyn Eves, author of Blood Rose Rebellion

"The Tethered Mage is a riveting read, with delicious intrigue, captivating characters, and a brilliant magic system. I loved it from start to finish!"—Sarah Beth Durst, author of The Queen of Blood

"Engaging and entertaining with intrigue, a good pace, and strong characters. Zaira and Amalia are bright, bold heroes in a smartly constructed world."—James Islington, author of The Shadow of What Was Lost

"One of the best first novels in a brand new high fantasy series that I've read in ages.... If you're hungry for a new fantasy series with awesome, nuanced characters, powerful worldbuilding, and solid writing - look no further. The Tethered Mage is the book you need right now. Absolutely recommended."—Book Smugglers

"Breathtaking... Worth every moment and every page, and should make anyone paying attentionexcited about what Caruso will write next."—BookPage

"The plotting is good, the characters interesting.... Something really special."—RT Book Reviews

"It's a pleasure to journey with shy and slightly awkward Amalia as she puts her scholarship in magic and puzzle-solving skills to good use.... Charming."—Kirkus

Melissa Caruso was born on the summer solstice and went to school in an old mansion with a secret door, but despite this auspicious beginning has yet to develop any known superpowers. Melissa has spent her whole life creating imaginary worlds, and in addition to writing is also an avid LARPer and tabletop gamer.

She graduated with honors in Creative Writing from Brown University and has an MFA in Fiction from the University of Massachusetts Amherst. Melissa's first novel, The Tethered Mage, was shortlisted for a Gemmell Morningstar award for best fantasy debut.
Loading...
or support indie stores by buying on