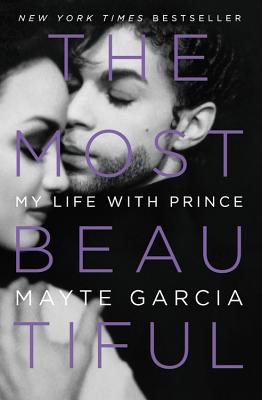 The Most Beautiful (Hardcover)

My Life with Prince

At the one-year anniversary of his death, legendary musician Prince's first wife shares a uniquely intimate, candid, and revelatory look inside the personal and professional life of one of the world's most beloved icons.

In The Most Beautiful, a title inspired by the hit song Prince wrote about their legendary love story, Mayte Garcia for the first time shares the deeply personal story of their relationship and offers a singular perspective on the music icon and their world together: from their unconventional meeting backstage at a concert (and the long-distance romance that followed), to their fairy-tale wedding (and their groundbreaking artistic partnership), to the devastating losses that ultimately dissolved their romantic relationship for good. Throughout it all, they shared a bond more intimate than any other in Prince's life. No one else can tell this story or can provide a deeper, more nuanced portrait of Prince--both the famously private man and the pioneering, beloved artist--than Mayte, his partner during some of the most pivotal personal and professional years of his career. The Most Beautiful is a book that will be returned to for decades, as Prince's music lives on with generations to come.

Mayte Garcia is an internationally acclaimed dancer, actress, singer, and choreographer. She has appeared in numerous films and starred in the VH1 reality series "Hollywood Exes," as well as "Army Wives," "Psych," "The Closer," and "Nip/Tuck." She lives in Los Angeles with her young daughter.

Praise For The Most Beautiful: My Life with Prince…

"An achingly loving memoir...a heartbreaking
inside look at the tortured side of genius that most of us are never allowed to
see, and it belongs on the shelf next to the definitive Prince bios."—Entertainment Weekly


"Garcia's
memoir raises complex issues about the nature and the value of privacy,
whether between celebrities and their fans, or two people in their intimate
lives together....given all of her book's revelations, Garcia never comes across
as vindictive...."—Maclean's

"A gentle and moving account of Ms. Garcia's
relationship with the legendary musician. [She] writes with clear eyes, grace and
dignity."—Huffington Post