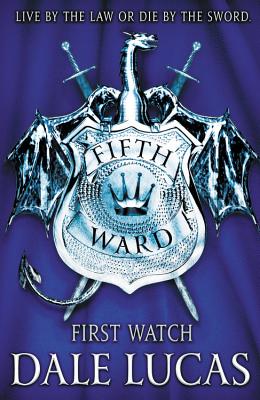 The grit of grimdark meets a police procedural in this rollicking debut fantasy series where two watchmen protect the streets of one of fantasy's most dangerous cities.

A member of the Yenara City guard has gone missing. The culprit could be any of the usual suspects: drug-dealing orcs, mind-controlling elves, uncooperative mages, or humans being typical humans.

It's up to two reluctant partners -- Rem, a miscreant who joins the Watch to pay off his bail, and Torval, a maul-wielding dwarf who's highly unimpressed with the untrained Rem -- to uncover the truth and catch the murderer loose in their fair city.

"A brilliant premise, wonderfully told. A city that breathes, and heroes you can't help but root for." -- Nicholas Eames, author of Kings of the Wyld

"A glorious tour through fantasy's seamier side. A wilder ride than Middle Earth, and you'll love every minute of it!" -- Jon Hollins, author of the Dragon Lords series

"If you're looking for a book that will give you everything you love about fantasy in a way you haven't seen before, you've found it."—B&N Sci-Fi & Fantasy Blog

"Dale Lucas tells a rambunctious tale that sends the two watchmen into the worst parts of Yanara, fighting orcs and dealing with elves. The case is far bigger than either expected and leads to villainy that is actually illegal in the city. I can't wait for the next case."—University City Review

"I could have read this story for eternity, the characters and world building are that good ... every scene is brought to life with blazing imagery that is tied to constant movement. The characterization is superb and continues to surprise as events unfold."—Koeur's Book Reviews

"First Watch is a thrilling adventure, it's a buddy action movie masquerading as a fantasy book... an awesome read."—The Tattooed Book Geek

Dale Lucas is a novelist, screenwriter, civil servant, and armchair historian from St. Petersburg, Florida. When not writing at home or trapped in a cubicle at his day job, he loves travel, great food, and buying more books than he'll ever be able to read.
Loading...
or
Not Currently Available for Direct Purchase