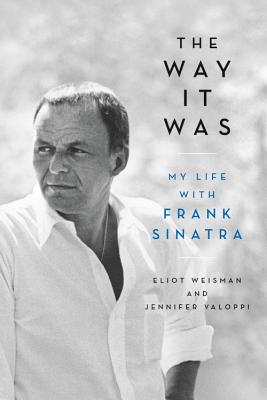 The Way It Was (Paperback)

My Life with Frank Sinatra

A candid and eye-opening inside look at the final decades of Sinatra's life told by his longtime manager and friend, Eliot Weisman.

By the time Weisman met Sinatra in 1976, he was already the Voice, a man who held sway over popular music and pop culture for forty years, who had risen to the greatest heights of fame and plumbed the depths of failure, all the while surviving with the trademark swagger that women pined for and men wanted to emulate. Passionate and generous on his best days, sullen and unpredictable on his worst, Sinatra invited Weisman into his inner circle, an honor that the budding celebrity manager never took for granted. Even when he was caught up in a legal net designed to snare Sinatra, Weisman went to prison rather than being coerced into telling prosecutors what they wanted to hear.

With Weisman's help, Sinatra orchestrated in his final decades some of the most memorable moments of his career. There was the Duets album, which was Sinatra's top seller, the massive tours, such as Together Again, which featured a short-lived reunion of the Rat Pack--until Dean Martin, having little interest in reliving the glory days, couldn't handle it anymore--and the Ultimate Event Tour, which brought Liza Minelli and Sammy Davis Jr. on board and refreshed the much-needed lining of both their pocketbooks. Weisman also worked with many other acts, including Steve Lawrence and Eydie Gorme, and an ungrateful Don Rickles, whom Weisman helped get out from under the mob's thumb.

Over their years together, Weisman became a confidant to the man who trusted few, and he came to know Sinatra's world intimately: his wife, Barbara, who socialized with princesses and presidents and tried to close Sinatra off from his rough and tough friends such as Jilly Rizzo; Nancy Jr., who was closest to her dad; Tina, who aggressively battled for her and her siblings' rights to the Sinatra legacy and was most like her father; and Frank Jr., the child with the most fraught relationship with the legendary entertainer. Ultimately Weisman, who had become the executor of Sinatra's estate, was left alone to navigate the infighting and hatred between those born to the name and the wife who acquired it, when a mystery woman showed up and threatened to throw the family's future into jeopardy.

Laden with surprising, moving, and revealing stories, The Way It Was also shows a side of Sinatra few knew. As a lion in winter, he was struggling with the challenges that come with old age, as well as memory loss, depression, and antidepressents. Weisman was by his side through it all, witness to a man who had towering confidence, staggering fearlessness, and a rarely seen vulnerability that became more apparent as his final days approached.

For two decades Eliot Weisman was the manager of Frank Sinatra. He is President of Premier Artists' Services and lives in Parkland, Florida.

Jennifer Valoppi is a multi-Emmy Award winning TV journalist, an award winning author and social entrepreneur, and the founder of the Women of Tomorrow Mentorship & Scholarship program.

Praise For The Way It Was: My Life with Frank Sinatra…

"A revealing look at the man behind the legend that chronicles everything from dates with Jackie Kennedy to fights with Donald Trump."—Billboard

"The Way it Was is a name-dropper's delight, from backstage memories of
Sinatra's aborted reunion tour with Dean Martin and Sammy Davis Jr. to
falling out with Don Rickles....a nostalgia trip."—Tampa Bay Times


"Sinatra was mostly a private man having only a select few confidantes who knew anything about his personal life. Among them-his long time manager Eliot Weisman. In his book, The Way It Was: My Life With Frank Sinatra, Weisman tells all on the late legend's sad final days."—RadarOnline.com

"A fascinating account of Eliot Weisman, who served as a
manager, confidant and advisor to some of the biggest names in
entertainment including Liza Minnelli, Sammy Davis Jr., Joan Rivers and
the 'Chairman of the Board,' legendary singer Frank Sinatra."—Parade

"Pushes aside preconceptions about the iconic singer and celebrity....Use[s] anecdotes and stories as a means of time travel."
—Gold Coast Magazine