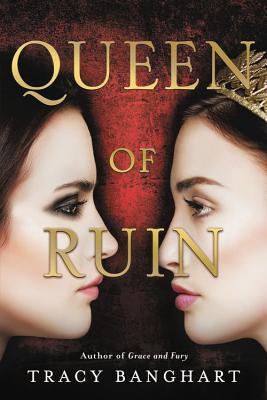 A fierce fantasy sequel full of sisterhood, heart-pounding action, betrayal, and royal intrigue, perfect for fans of The Belles and Caraval.
When the new, brutal Superior banishes Nomi from Bellaqua, she finds herself powerless and headed towards her all-but-certain death. Her only hope is to find her sister, Serina, on the prison island of Mount Ruin. But when Nomi arrives, it is not the island of conquered, broken women that they expected. It is an island in the grip of revolution, and Serina--polite, submissive Serina--is its leader.
Betrayal, grief, and violence have changed both sisters, and the women of Mount Ruin have their sights set on revenge beyond the confines of their island prison. They plan to sweep across the entire kingdom, issuing in a new age of freedom for all. But first they'll have to get rid of the new Superior, and only Nomi knows how.
Separated once again, this time by choice, Nomi and Serina must forge their own paths as they aim to tear down the world they know, and build something better in its place.
The stakes are higher and the battles bolder in Tracy Banghart's unputdownable sequel to Grace and Fury.

Praise For Queen of Ruin (Grace and Fury #2)…

Praise for Queen of Ruin:
"The nonstop action of the second installment makes this novel very hard to put down. Each hard-won battle seems destined to fail...The losses are heartrending and incalculable...These women are no simpering ladies; they are warrior queens and proud of it. Refreshing and unique, this novel will find a wide audience among young women."—VOYA

"Banghart threads Viridia's lore and history in her narrative as she brings Serina and Nomi's stories to their fierce, sometimes violent conclusions."
—Booklist

"Fierce, fun, [and] fast-paced... empowering from start to finish and doesn't flinch in proving that sometimes the life you want isn't the one you expected--and you won't know until you fight for it."
—Sarah Henning, author of Sea Witch

"A fierce story of sisterhood and survival. Absolutely riveting. I couldn't help but cheer for these ferocious young women."
—Kaitlyn Sage Patterson, author of The Diminished

Praise for Grace and Fury:
"The Handmaid's Tale meets The Bachelor, Grace and Fury is fast-paced, feminist, and a perfect summer read."—Bustle

"The Handmaid's Tale gets a YA twist in this debut...The pace is quick, the ending promises a sequel, and the plot couldn't be more relevant. Buy an extra copy--this should find an audience."
—Booklist

"The timely YA response to The Handmaid's Tale."—Hypable

"Banghart...breathes new life into this feminist story of oppression and resistance. The sisters...shift and grow, adding depth to each character. Fans of Keira Cass and Marie Rutkoski will be drawn to this absorbing story and left eager for another installment."
—Publishers Weekly

"Banghart's prose is florid and engaging, and she expands the drama explosively. Fans of The Hunger Games will appreciate the similar plotting in this first installment of a planned trilogy. An easy hand-sell that will find a willing audience in those who have enjoyed Dhonielle Clayton's The Belles and Stephanie Garber's Caraval."—SLJ

"A dystopian YA delight."
—Frolic

"If you're looking for a new read to add to your ever-growing list, Grace and Fury is one you shouldn't miss. It's full of suspense, deception, and #girlpower."—Her Campus

"Fiercely feminist and beautifully rebellious. A story of finding sisterhood in the face of oppression that will stay with me forever."
—Kass Morgan, New York Times bestselling author of The 100 series and Light Years

"Two sisters fight for freedom in a fantasy novel with a blisteringly fast pace and a cathartic ending."
—Kate Elliott, New York Times bestselling author of the Court of Fives series

Tracy Banghart grew up in rural Maryland and spent her summers on a remote island in northern Ontario. All that isolation and lovely scenery gave her the time to read voraciously and the inspiration to write her own stories. Always a bit of a nomad, Tracy now travels the world Army-wife style with her husband, son, and several mischievous fur babies. She wrote Grace and Fury while living in Hawaii.
Loading...
or support indie stores by buying on