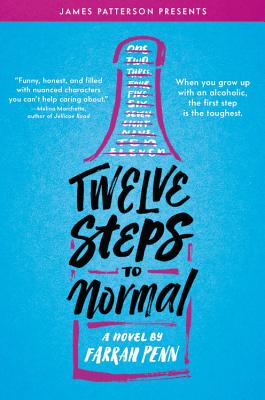 James Patterson presents Twelve Steps to Normal, an emotionally resonant novel that shows that while some broken things can't be put back exactly the way they were, they can be repaired and made even stronger. Now available in paperback.
Kira's Twelve Steps To A Normal Life
1. Accept Grams is gone.
2. Learn to forgive Dad.
3. Steal back ex-boyfriend from best friend...
And somewhere between 1 and 12, realize that when your parent's an alcoholic, there's no such thing as "normal."
When Kira's father enters rehab, she's forced to leave everything behind--her home, her best friends, her boyfriend...everything she loves. Now her father's sober (again) and Kira is returning home, determined to get her life back to normal...exactly as it was before she was sent away.
But is that what Kira really wants?
Life, love, and loss come crashing together in this visceral, heartfelt story by BuzzFeed writer Farrah Penn about a girl who struggles to piece together the shards of her once-normal life before his alcoholism tore it apart.

"Farrah Penn's debut, Twelve Steps to Normal, is a heartfelt story about the aftermath of addiction. Equal parts swoony and poignant, I couldn't help but cheer for her main character Kira as she tries to put her life back together in the wake of loss."
—Julie Buxbaum, New York Times bestselling author of Tell Me Three Things

"Step one: Pick up this compulsively readable book and fall in love with its richly drawn characters and deeply empathetic reminder that none of us are broken beyond repair.
Step two: Repeat."
—Jeff Zentner, author of the ALA William C. Morris Award winner The Serpent King

"A heartfelt, nuanced story about learning to forgive and taking the best of the past, hoping for the best of the future. Kira's struggle to understand and move on from her father's flaws to her own is moving and real."
—Huntley Fitzpatrick, author of the YALSA Best Fiction for Young Adults title My Life Next Door

Farrah Penn was born and raised in a suburb in Texas that's far from the big city, but close enough to Whataburger. She now resides in Los Angeles, CA, with her gremlin dog and succulents. When she's not writing books, she can be found writing things for BuzzFeed and sending texts that contain too many emojis. Twelve Steps to Normal is her first novel.
Loading...
or
Not Currently Available for Direct Purchase