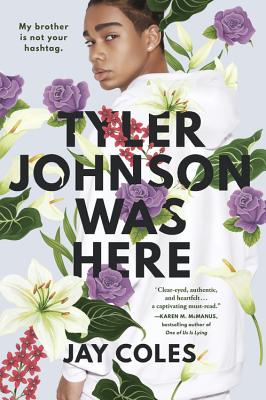 A young man searches for answers after the death of his brother at the hands of police in this striking debut novel, for readers of The Hate U Give.

When Marvin Johnson's twin, Tyler, goes to a party, Marvin decides to tag along to keep an eye on his brother. But what starts as harmless fun turns into a shooting, followed by a police raid.

The next day, Tyler has gone missing, and it's up to Marvin to find him. But when Tyler is found dead, a video leaked online tells an even more chilling story: Tyler has been shot and killed by a police officer. Terrified as his mother unravels and mourning a brother who is now a hashtag, Marvin must learn what justice and freedom really mean.

Tyler Johnson Was Here is a powerful and moving portrait of youth and family that speaks to the serious issues of today--from gun control to the Black Lives Matter movement.

Praise For Tyler Johnson Was Here…

An Entertainment Weekly Most Anticipated Book of the Year

"Exploring the current climate of police brutality and viral culture, this harrowing YA effort is based on its author's own experiences with tragedy and loss, a personal touch felt across every page."—Entertainment Weekly

"An unflinching look at police brutality and systemic racism in America."—Bustle

* "This well-written, fast-paced story eloquently addresses how to grieve, plan, and participate in the burial of a loved one.... [A] standout debut."—School Library Journal, starred review

* "Unforgettable.... Coles' exploration of brotherhood, grief, friendship, and familial ties is as moving and relevant as its exploration of racism."—Booklist, starred review

"A distressing yet empowering portrait of a black teenager confronting relentless racism, brutality, and tragedy."—Publishers Weekly

"Clear-eyed, authentic, and heartfelt, Tyler Johnson Was Here is a captivating must-read."—Karen M. McManus, New York Times bestselling author of One of Us Is Lying

"Uncompromising and intense, this heart-wrenching novel sends out an anguished cry for justice to all who are willing to hear."—Shelf Awareness

"Gripping from the very first scene, Tyler Johnson Was Here is a powerful and vulnerable immersion into the lives of people who are too rarely given a voice."—Adi Alsaid, author of Let's Get Lost and Never Always Sometimes

"Tyler Johnson Was Here refuses to pull its punches. Marvin's story will remake you. The careful prose, the heartbreaking story, but also the triumph of a young man in the face of an often lightless world. Jay Coles delivers the first book in what will be an illuminating career."—Scott Reintgen, author of Nyxia

Jay Coles is a graduate of Vincennes University and Ball State University. When he's not writing diverse books, he's advocating for them, teaching middle school students, and composing for various music publishers. His debut novel Tyler Johnson Was Here is based on true events in his life and inspired by police brutality in America. He resides in Indianapolis, Indiana, and invites you to visit his website at jaycoleswrites.com.
Loading...
or support indie stores by buying on