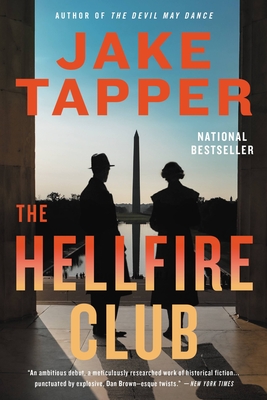 Charlie Marder is an unlikely Congressman. Thrust into office by his family ties after his predecessor died mysteriously, Charlie is struggling to navigate the dangerous waters of 1950s Washington, DC, alongside his young wife Margaret, a zoologist with ambitions of her own. Amid the swirl of glamorous and powerful political leaders and deal makers, a mysterious fatal car accident thrusts Charlie and Margaret into an underworld of backroom deals, secret societies, and a plot that could change the course of history. When Charlie discovers a conspiracy that reaches the highest levels of governance, he has to fight not only for his principles and his newfound political career...but for his life.

Praise For The Hellfire Club (Charlie and Margaret Marder Mystery)…

Praise for The Hellfire Club

"This is a remarkably accomplished effort, especially for a first novel, very much like a Brad Meltzer thriller: energetic and mysterious, with plenty of suspense and a general feeling of evil lurking just barely behind the scenes. Tapper brings an expert's eye to the novel, too, layering it with the kind of detailed political knowledge that only someone with his first-hand experience could bring to the story. An auspicious debut."—Booklist

"Fiction is as suspenseful as truth in Jake Tapper's The Hellfire Club"—Vanity Fair, What to Read in May

"The action comes fast and furious, "House of Cards" on steroids; you'll be turning pages faster than a cable channel updates its chyron. Perfect for an airplane or the beach, The Hellfire Club is a worthy distraction from the real-life news cycle Tapper presides over."—Cynthia Dickison, Minnesota Star Tribune

"Insightful... Tapper takes readers back to a Washington remembered for being a time of distrust and potential future conflicts. Key historical figures interact with Tapper's fictional characters, and with his sources at the end of the novel showcasing his research, it almost feels like everything actually happened. It is fiction, however, well-written and worthwhile."—Jeff Ayers, The Associated Press

"[The Hellfire Club is] both an engaging and slyly timely foray into Washington politics... incorporat(ing) shades of Frank Capra's Mr. Smith Goes to Washington as well as elements of contemporary toxic alliances."—Seattle Review of Books

"Startlingly good...a reminder that the rarest thing of all in spy novels is a writer willing to give us a character who could exist just as easily in any kind of literary fiction."—Alexander Aciman, Tablet

"[The Hellfire Club] has the best qualities of this sort of historical fiction, which include the winking perspective of the present."—Ben Smith, BuzzFeed

"a splashy, swampy page-turner [that] plunges readers into the heart of '50s Washington, D.C. The book showcases Tapper's passion for American political history, rich as it is with fascinating period details, as well as his feel for a story well-told."—David Canfield, Entertainment Weekly

"Tapper uses his storytelling chops to deftly put you in the moment when Joe McCarthy was waving his infamous paper and the Congress was at peak skullduggery. Hellfire is a potent thriller, replete with well-developed characters that made me think that history does indeed repeat itself."—David Baldacci, #1 New York Times Bestselling author of End Game

"The Hellfire Club's first, thrilling scene pulled me into 1950s Washington, D.C., and didn't let go until the last, satisfying page. Tapper's passions for history and politics shine through in this remarkably timely, page-turning debut."—Alafair Burke, author of the New York Times Bestselling The Wife

"A fast-paced, thrilling story of corruption and intrigue in Washington, DC, Jake Tapper's The Hellfire Club is terrific: provocative and timely."—Harlan Coben

"A fun, fast, gripping thriller full of real-life dirty dealmakers and legendary political power-brokers. No one knows the ins and outs of Washington politics like Jake Tapper."—Anderson Cooper, #1 New York Times Bestselling author of Dispatches from the Edge

"Leave it to Tapper to find the truth in fiction. This great buzzsaw of a mystery is packed with indecent politicians and secret societies - making the 1950s setting just as relevant today. The scariest part of The Hellfire Club is that it proves Washington - and America - is forever mourning for the past."—Brad Meltzer, The Escape Artist

"Here's your chance to get up close and personal with John and Bobby Kennedy, Nixon, Eisenhower, Kefauver, LBJ and Joe McCarthy. Jake Tapper puts you right back in the 50's. At the same time, Tapper has written a superior thriller that I couldn't stop reading. To be completely honest though, Tapper is an irritating bastard. Journalists like him are supposed to be writing dusty non-fiction tomes that help us get to sleep, not thrillers that keep us up half the night. The Hellfire Club is a helluva good read. Now Tapper should return to writing non-fiction."—James Patterson, #1 New York Times Bestselling author

Praise for THE OUTPOST:


"The Outpost is a mind-boggling, all-too-true story of heroism, hubris, failed strategy, and heartbreaking sacrifice. If you want to understand how the war in Afghanistan went off the rails, you need to read this book."—Jon Krakauer, author of Into Thin Air and Where Men Win Glory

"This is a narrative, not a polemic, and Tapper patiently lays out the history of what happened at Keating in a gripping, forceful style...[T]his unadorned, powerful accountchallenges the purposes and wisdom of America's ongoing military presence [in Afghanistan]...A timely indictment of a thoughtless waste of young American lives."—Kirkus Reviews