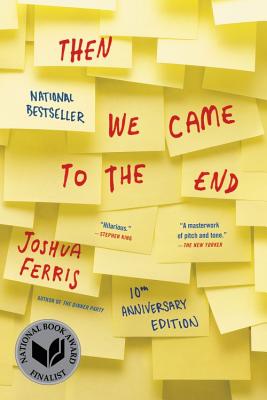 Then We Came to the End (Paperback)

This wickedly funny, big-hearted novel about life in the office signals the arrival of a gloriously talented writer.

The characters in Then We Came to the End cope with a business downturn in the time-honored way: through gossip, secret romance, elaborate pranks, and increasingly frequent coffee breaks. By day they compete for the best office furniture left behind and try to make sense of the mysterious pro-bono ad campaign that is their only remaining "work."

Praise For Then We Came to the End: A Novel -- 10th Anniversary Edition…

"A charming and sometimes
very funny story of worker bees pushed past the brink of boredom....Ferris
maintains a wonderfully wry tone and has a fine observational eye for all the
absurdities of the modern workplace."—USA Today

"Not too many authors have written the Great American Office Novel. Joseph Heller did it in Something Happened (the one book of his to rival Catch-22). And Nicholson Baker pulled it off in zanily fastidious fashion in The Mezzanine. To their ranks should be added Joshua Ferris, whose THEN WE CAME TO THE END feels like a readymade classic of the genre. . . . A truly affecting novel about work, trust, love, and loneliness."—Michael Upchurch, Seattle Times