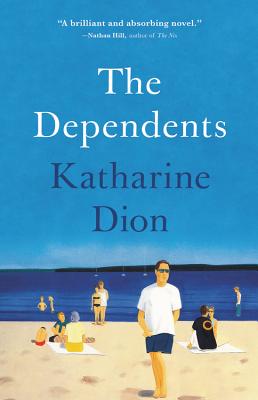 Praise For The Dependents…

"An eloquent debut about memory, love, grief, and friendship . . . The Dependents moves elegantly from past to present, starting with four college friends whose lives become inexorably linked . . . The talented Dion has written a gorgeously meditative debut about how unfully we live our lives or know ourselves and our loved ones."—Caroline Leavitt, San Francisco Chronicle

"This is the beach read you'll still be thinking about as the leaves fall...Debut novelist Dion writes like a dream. Or John Cheever crossed with a very insightful feminist."—Kim Hubbard, People

"Dion's resplendent debut ponders the fickleness of memory and the human propensity for nostalgia and self-doubt."—O Magazine

"Dion's debut is a heartbreaking meditation on the long process that is healing from grief."—Real Simple

"When this book arrived in the mail, its author, Katharine Dion, was a person unknown to me. Not anymore. The Dependents is a fine debut, full of intelligent writing and free of the canine desire to please that afflicts so much contemporary writing. And yet this book pleases on many levels. I will look for Ms. Dion's work in the future."—Jeffrey Eugenides, Pulitzer Prize-winning and New York Times bestselling author of Middlesex and The Marriage Plot

"This richly textured family drama is a marvel of a novel. With great subtlety and tact, it evokes the love, devotion, and sadness that bind a grieving father to his troubled daughter. Its cumulative power comes from the depth of Dion's entry into her characters and the vividness of her prose that brings them to life. The Dependents is one of the best debut novels I've read in years, and a very auspicious one.—Adam Haslett, Pulitzer Prize finalist and author of Imagine Me Gone

"The Dependents is a big book, one that grapples with important questions through generations--the way we live now, the way we may have chosen to live then--and the consequences. Dion's intelligence and ambition truly shine through sentence after sentence."—Kate Walbert, National Book Award finalist and author of A Short History of Women

"The Dependents is a brilliant and absorbing novel that's not afraid to ask the big questions: What is the source of happiness? How do we recover from loss? How much do we really know about the people we love? This is a masterly portrait of grief written by an author of enormous sensitivity and insight."—Nathan Hill, New York Times bestselling author of The Nix

"Dion builds tension by revealing bits and pieces of the saga gently and cleverly, carefully propelling the action onward even when Gene is considering the past."—Oakland Magazine

"Dion's debut novel is a seamless exploration of Gene's past life, long marriage, deep friendships, and present-day struggles through loss and understanding. Her rich and nuanced characters combine with her exceptional writing to create a powerful and intimate look at the inner workings of one family. The Dependents is a deeply satisfying examination of the gulf between what we want to believe and the truth, and readers will be eager for more from Dion."—Booklist (starred review)

"Dion's
melancholy, meditative debut dwells in the head of Gene Ashe, a widower after
49 years of marriage.... At this novel's most successful moments, the depiction
of Gene's mental state achieves the eloquence and insight of C.S. Lewis' A
Grief Observed: 'It amazed him he could still remember so much about the
particular way she had inhabited the world. Such intimacy, to think of these
things, to know exactly the way she had cared for her own body or moved it
through space.' Intelligent and profound."—Kirkus

"Death and unavoidable truth shatter the serene surface of a man's golden years in Dion's fine debut...The narrative travels back and forth through Gene's life as he tries to pick apart the performative from the heartfelt acts of love. The result is a beautiful story of communication and commitment."—Publishers Weekly

"In this first novel, set in a small New Hampshire town a few years ago, Gene Ashe is mourning the sudden loss of his beloved wife of many years. Now that Maida is gone, he is alone; his daughter, Dary, is a single mother living on the other side of the country. Gene has always wondered why he and Dary don't get along as well as he would like. Now his grief adds to his concern about his daughter and granddaughter Annie. To complicate matters, Gene becomes involved with his caretaker, a pleasant but emotionally remote older woman. He can't stop thinking about the past, especially his relationship with longtime friends Ed and Gayle Donnelly. Gene broods over former regrets as he makes a winter visit alone to an old haunt, the lake cabin that his family used to share with Ed and Gayle and their children. What if he is remembering the past all wrong? VERDICT Promising young novelist Dion portrays a lonely older man in a sympathetic, believable way in this insightful story about friendship, love, and loss."—Leslie Patterson, Library Journal

Katharine Dion was born in Oakland, California. She is a graduate of the Iowa Writers' Workshop, where she was awarded the Iowa Arts Fellowship. She has also been a MacDowell Fellow and the recipient of a grant from the Elizabeth George Foundation. She lives in Berkeley, California. The Dependents is her first novel.
Loading...
or
Not Currently Available for Direct Purchase