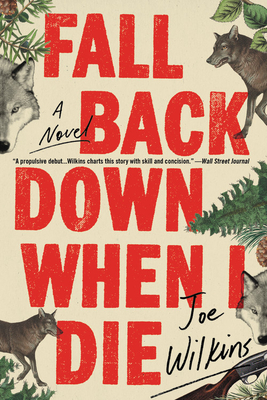 Fall Back Down When I Die

"The lurking menaces in the lives of each character in Fall Back Down When I Die are shadowy, elusive, and always just out of reach, complicated by a set of decades-old, interrelated conflicts...the oppressive poverty and hardship that lingers in the atmosphere is palpable."—Erin H. Turner, Big Sky Journal

"Stunning, haunting, and complex...Wilkins's combination of vibrant language and characterization elevates the novel...he forces readers to see beyond the stereotypes of rural America and embrace the characters as sophisticated and dynamic individuals...Wilkins's gifts as a seasoned poet and memoirist shine through in his use of figurative language, imagery, sentence fragments, and the way he builds up and tears down the threads of family. Fall Back Down When I Die is a timely addition to the literature of the West. It is a direct and unflinching representation of the way people, land, politics, and myth tangle with each other at the beginning of the twenty-first century."—Andrew Jones, Split Rock Review

Joe Wilkins is the author of the award-winning memoir The Mountain and the Fathers. His work has appeared in the Georgia Review, the Harvard Review, Slate, and elsewhere. He is a Pushcart Prize winner and a finalist for the National Magazine Award and the PEN/USA Award. He lives with his wife and two children in western Oregon, where he teaches writing at Linfield College.
Loading...
or support indie stores by buying on