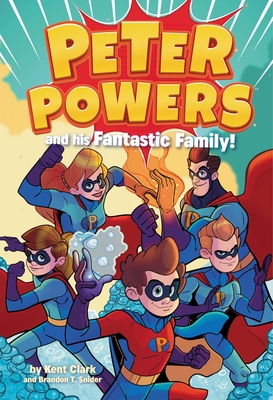 Peter Powers and His Fantastic Family!

If you like the Avengers, Justice League, or The Incredibles, then you'll love this family of superheroes This new chapter book series is perfect for reluctant readers.
For a long time, Peter Powers thought he had the lamest super powers ever. All he could do was make ice cubes with his fingers. But after lots of practice, Peter grew better and stronger. He's finally on his way to being a real superhero...
Now, his family's treating him with the respect he deserves. In fact, they've never been nicer. So why does Peter feel like something's wrong? And what does it have to do with Grandpa's new ex-girlfriend, Lady Diablo? Peter and his super-powered friends better figure it out fast, or this might be the end of the Powers family
This title is the eighth chapter book in a new series of exciting stories about a young boy who has some rather crummy (and hilarious ) superpowers. Each story is full of humor, action, and fun, but the charm can be found in the heartfelt message about the power of family, friends, and having confidence. (c)2018 by Hachette Book Group, Inc.

KENT CLARK is a superhero by day, and a writer by night. When he's not getting cats out of trees or saving the world from monstrous alien supervillains, he's reading a book. He also has a terrible weakness-he can't say no to tacos, comic books, or video games. BRANDON T. SNIDER writes books about Transformers, Minions and even Batman! When he's not writing superhero stories, he's either on TV or eating as much cheese as possible in order to unlock cheese-related superpowers-which is not working. DAVE BARDIN is an illustrator by day and, well, night too. When he's not drawing in his Stronghold of Seclusion he patrols the streets, protecting the innocent and vanquishing evil. Strangely, the source of his powers is also his one weakness--MASHED POTATOES!
or support indie stores by buying on