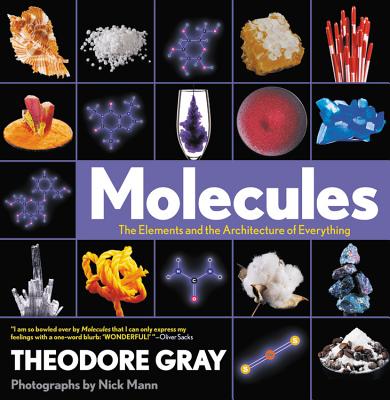 The Elements and the Architecture of Everything

In his highly anticipated sequel to The Elements, Theodore Gray demonstrates how the elements of the periodic table combine to form the molecules that make up our world.

Everything physical is made up of the elements and the infinite variety of molecules they form when they combine with each other. In Molecules, Theodore Gray takes the next step in the grand story that began with the periodic table in his best-selling book, The Elements: A Visual Exploration of Every Known Atom in the Universe. Here, he explores through fascinating stories and trademark stunning photography the most interesting, essential, useful, and beautiful of the millions of chemical structures that make up every material in the world.

Gray begins with an explanation of how atoms bond to form molecules and compounds, as well as the difference between organic and inorganic chemistry. He then goes on to explore the vast array of materials molecules can create, including: soaps and solvents; goops and oils; rocks and ores; ropes and fibers; painkillers and dangerous drugs; sweeteners; perfumes and stink bombs; colors and pigments; and controversial compounds including asbestos, CFCs, and thimerosal.

Big, gorgeous photographs, as well as diagrams of the compounds and their chemical bonds, rendered with never before seen beauty, fill the pages and capture molecules in their various states.

As he did in The Elements, Gray shows us molecules as we've never seen them before. It's the perfect book for his loyal fans who've been eager for more and for anyone fascinated with the mysteries of the material world.

Praise For Molecules: The Elements and the Architecture of Everything…

"AP Chem would have been way more fun if textbooks resembled this visually exciting tome."—Entertainment Weekly, "Must List"

"A masterpiece...Suddenly the physical world makes a lot more sense."—BoingBoing

"A must-have for anyone of any age or education."—Jamie Hyneman

Nick Mann is a photographer specializing in taking beautiful photos of inanimate objects on black backgrounds. His other work includes Molecules,, Reactions, and How Things Work. Originally of Urbana, IL, he lives in Champaign, IL and North Liberty, IA, where he is working towards a geology degree at Cornell College.
Loading...
or support indie stores by buying on