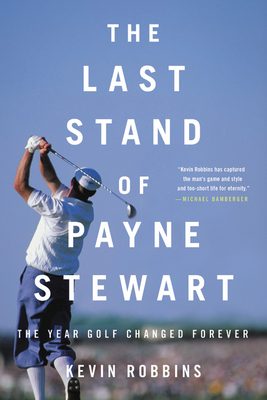 The Last Stand of Payne Stewart

From award-winning sports writer Kevin Robbins, discover the story of legendary golfer Payne Stewart, focusing on his last year in the PGA Tour in 1999, which tragically culminated in a fatal air disaster that transpired publicly on televisions across the country.
Forever remembered as one of the most dramatic storylines in the history of golf, Payne Stewart's legendary career was bookended by a dramatic comeback and a shocking, tragic end. Here, Robbins brings Stewart's story vividly to life.
Written off as a pompous showman past the prime of his career, Stewart emerged from a long slump in the unforgettable season of 1999 to capture the U.S. Open and play on the victorious U.S. Ryder Cup team. He appeared to be a new man that summer: wiser, deeper, and on the verge of a new level of greatness. Then his journey to redemption ended in October, when his chartered Learjet flew aimlessly for more than a thousand miles, ran out of fuel, and fell to earth in a prairie in South Dakota.
His death marked the end of an era, one made up of "shotmakers" who played the game with artistry, guile, finesse, and heart. Behind them were Tiger Woods, David Duval, Phil Mickelson, and other young players whose power and strength changed the PGA Tour forever. With exclusive access to Stewart's friends, family, and onetime colleagues, Kevin Robbins provides a long-overdue portrait of one of golf's greats in one of golf's greatest seasons.
Winner of the USGA Herbert Warren Wind Book Award

Praise For The Last Stand of Payne Stewart: The Year Golf Changed Forever…

"Payne Stewart was the last of golf's great swingers. In The Last Stand, Kevin Robbins has captured the man's game and style and too-short life for eternity."—Michael Bamberger, author of Men in Green

"Robbins delves convincingly into the agonizing nitty-gritty of what it takes to miss one less fairway per round, convert one more up-and-down and make one more crucial putt-the tiny improvements that spell the difference between winning a tournament and finishing in the middle of the pack."
—The Wall Street Journal

"Riveting and heartbreaking...Focus[ing] on the final year of Stewart's life while expertly weaving in biographical details...Robbins provides both highly detailed and memorable accounts of Stewart's tournaments...Powerful...This excellent biography is sure to please many a golf aficionado."
—Publishers Weekly

"Few public men have been more obviously flawed than brash, big-mouthed, attention-seeking Payne Stewart, and a slew of his contemporaries might seem better qualified to embody that era. Yet Kevin Robbins has pulled off the impossible: By charting Stewart's herky-jerk walk from brattishness to humility, while illuminating his play as the last-gasp of a golf now gone forever, he has revealed in his subject a largeness, a grace, that even Stewart never dreamed he had. So buy in -- and buckle up. Robbins' meticulously-reported work on Stewart's last hours stands as some of the finest writing on flight -- both its beauty and horrors -- published in years."
—S.L. Price, Sports Illustrated senior writer and author of Playing Through the Whistle: Steel, Football, and An American Town

"Kevin Robbins knows golf, and he has brought
energy and verve to the task of unraveling Payne Stewart's enigmatic life. This
is a wise and beautifully written book about the inner life and journey of a
gifted athlete."

—Wil Haygood, author of The Butler

"Around Payne Stewart's life, and death, mystique has grown. Kevin Robbins makes it all so lucid and real. There's brilliant reporting here, great humanity, and writing as memorably stylish as Stewart's famed plus fours. Reading this, the gallery will roar."
—Gary M. Pomerantz, author, The Last Pass: Cousy, Russell, the Celtics, and What Matters in the End

"In many ways, Stewart was an enigma. Robbins captures his essence with incisive reporting and beautiful writing."
—Golf Channel

Kevin Robbins is an award-winning veteran sports writer and the author of Harvey Penick, co-winner of the 2017 Herbert Warren Wind International Book Award. He has written for The New York Times, Texas Monthly, the St. Louis Post-Dispatch, the Austin American-Statesman, The Memphis Commercial Appeal,Golf.com, and Golf Journal. He teaches journalism at the University of Texas at Austin.
Loading...
or support indie stores by buying on