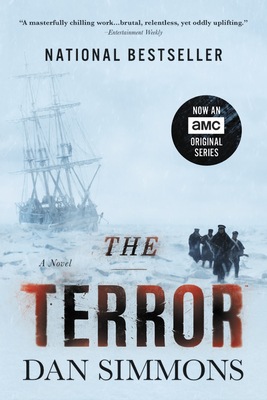 The men on board the HMS Terror — part of the 1845 Franklin Expedition, the first steam-powered vessels ever to search for the legendary Northwest Passage — are entering a second summer in the Arctic Circle without a thaw, stranded in a nightmarish landscape of encroaching ice and darkness. Endlessly cold, they struggle to survive with poisonous rations, a dwindling coal supply, and ships buckling in the grip of crushing ice. But their real enemy is even more terrifying. There is something out there in the frigid darkness: an unseen predator stalking their ship, a monstrous terror clawing to get in.

“The best and most unusual historical novel I have read in years.” —Katherine A. Powers, Boston Globe

Praise For The Terror…

"The best and most unusual historical novel I have read in years."—The Boston Globe

"The Terror is nothing less than a revelation. Dan Simmons is a giant among novelists, and I am in awe of his achievement."—Lincoln Child

"Dan Simmons writes with the salty grace and precision of Patrick O'Brian. But in piling supernatural nightmare upon historical nightmare, layering mystery upon mystery, he has produced a turbocharged vision of popular doom."—Men's Journal

Dan Simmons is the Hugo Award-winning author of several novels, including the New York Times bestsellers Olympos and The Terror. He lives in Colorado.
Loading...
or support indie stores by buying on
(This book is on backorder)