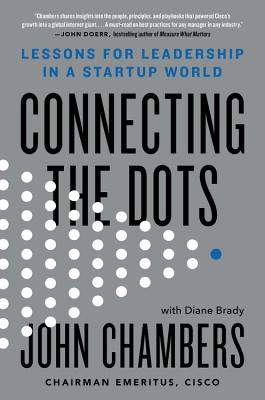 Lessons for Leadership in a Startup World

Silicon Valley visionary John Chambers shares the lessons that transformed a dyslexic kid from West Virginia into one of the world's best business leaders and turned a simple router company into a global tech titan.

When Chambers joined Cisco in 1991, it was a company with 400 employees, a single product, and about $70 million in revenue. When he stepped down as CEO in 2015, he left a $47 billion tech giant that was the backbone of the internet and a leader in areas from cybersecurity to data center convergence. Along the way, he had acquired 180 companies and turned more than 10,000 employees into millionaires. Widely recognized as an innovator, an industry leader, and one of the world's best CEOs, Chambers has outlasted and outmaneuvered practically every rival that ever tried to take Cisco on--Nortel, Lucent, Alcatel, IBM, Dell, and Hewlett-Packard, to name a few.

Now Chambers is sharing his unique strategies for winning in a digital world. From his early lessons and struggles with dyslexia in West Virginia to his bold bets and battles with some of the biggest names in tech, Chambers gives readers a playbook on how to act before the market shifts, tap customers for strategy, partner for growth, build teams, and disrupt themselves. He also adapted those lessons to transform government, helping global leaders like French President Emmanuel Macron and Indian Prime Minister Narendra Modi to create new models for growth.

As CEO of JC2 Ventures, he's now investing in a new generation of game-changing startups by helping founders become great leaders and scale their companies.

Connecting the Dots is destined to become a business classic, providing hard-won insights and critical tools to thrive during the accelerating disruption of the digital age.

Praise For Connecting the Dots: Lessons for Leadership in a Startup World…

"Connecting the Dots is powerful, penetrating, and unblinkingly personal. With a rich store of behind-the-scenes stories from his remarkable 20 years as CEO, John Chambers shares insights into the people, principles, and playbooks that powered Cisco's growth into a global Internet giant. Here is a must-read on best practices for any manager in any industry."—John Doerr, Chairman,Kleiner Perkins and bestselling author of Measure What Matters

"By turns practical and insightful, John Chambers' indefatigable spirit, sound judgment, and depth of experience shine through in Connecting the Dots. Throughout his career, Chambers set a standard of leadership and innovation over the better part of 20 years. And these lessons apply to all of us--in business and in life."
—Jamie Dimon, Chairman and CEO, JPMorgan Chase

"Great leaders are distinguished by the ability to move their society or company from where it is to where it has never been. They act on the basis of a set of core principles, both intangible and inspirational. John Chambers, an accomplished executive in his own right, distills those principles in Connecting the Dots with elegance and common sense."—Henry Kissinger, former U.S. Secretary of State

"I watched John Chambers lead Cisco through massive
tech disruptions, countless economic cycles, and scores of acquisitions that
killed many of his competitors. This is a compelling story of effective
leadership through good times and bad, filled with smart lessons about
innovation, team building, and managing creativity. An important and relevant
read-I highly recommend it."

"I've always known John Chambers to be wise, and credit him for the business ideas that helped Oracle be successful. With the brilliant insights found in Connecting the Dots, I learned even more that I plan to use. Whether it's how to learn from difficult setbacks, find your courage as a leader, focus on the customer, and so much else, this is a must-read for any business person. A very personal and incredibly engaging book!"—Safra Catz, CEO, Oracle

"Explains how Chambers reinvented himself and his company over two
decades and shares the leadership strategies that made him one of the
last CEOs of a major tech company from his generation to step down."

"If you want to learn from a master of Silicon Valley, then look no further than John Chambers. What he teaches the world's best tech startups today is captured in Connecting the Dots."—Marc Andreessen,General Partner, Andreessen Horowitz

"Connecting the Dots is full of tips on everything from setting big goals and beating competitors, to surviving failures....At the age of 69, Chambers now sees dyslexia as one of his super-powers, forcing him to process information differently and allowing him to see patterns; a trait all business leaders must develop."—Business Insider

"Connecting the Dots has some sobering words for corporate America and for our government....Chambers' most pressing worry [is] that we are no longer the world's most innovative country....[Connecting the Dots] also passes on plenty of uplifting takeaways for business leaders of companies large and small."—Fortune.com

"Over the years, I've seen John Chambers achieve the virtually impossible, and all by following his blueprint, which he finally reveals in Connecting the Dots. He has done us all a service by making it available, and the smartest thing you could do for yourself and your company is to make it your bible."—Meg Whitman, former President and CEO, Hewlett Packard Enterprise

"John Chambers shares his secrets for building and
leading one of the most innovative and customer-centric companies in the
world. This is an invaluable resource for any CEO, entrepreneur, or
leader looking to compete in the digital age."

—Aaron Levie,cofounder and CEO of Box

John Chambers, chairman emeritus at Cisco, served as the company's CEO for more than two decades. He has worked closely with government leaders from around the world, serving on committees for two U.S. presidents and earning the first-ever Clinton Global Citizen Award as well as the Woodrow Wilson Award for Corporate Citizenship. He is also the founder and CEO of JC2 Ventures, where he helps disruptive startups to scale and lead market transitions.

Diane Brady is an award-winning journalist and consultant who has covered the global business landscape for Bloomberg Businessweek, the Wall Street Journal, and other media outlets. Her previous book, Fraternity, was named one of Amazon's best books of 2012.
Loading...
or support indie stores by buying on