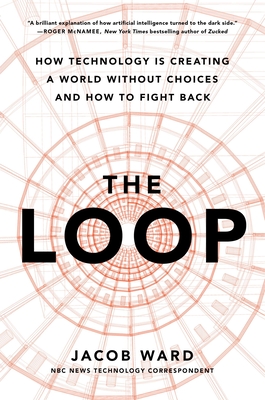 This eye-opening narrative journey into the rapidly changing world of artificial intelligence reveals the dangerous ways AI is exploiting the unconscious habits of our minds—and the real threat it poses to humanity.

"The best book I have ever read about AI." -Roger McNamee, New York Times bestselling author of Zucked

Artificial intelligence is going to change the world as we know it. But the real danger isn't some robot that's going to enslave us: It's our own brain. Our brains are constantly making decisions using shortcuts, biases, and hidden processes—and we're using those same techniques to create technology that makes choices for us. In The Loop, award-winning science journalist Jacob Ward reveals how we are poised to build all of our worst instincts into our AIs, creating a narrow loop where each generation has fewer, predetermined, and even dangerous choices.

Taking us on a world tour of the ongoing, real-world experiment of artificial intelligence, The Loop illuminates the dangers of writing dangerous human habits into our machines. From a biometric surveillance state in India that tracks the movements of over a billion people, to a social media control system in China that punishes deviant friendships, to the risky multiple-choice simplicity of automated military action, Ward travels the world speaking with top experts confronting the perils of their research. Each stop reveals how the most obvious patterns in our behavior—patterns an algorithm will use to make decisions about what's best for us—are not the ones we want to perpetuate.

Just as politics, marketing, and finance have all exploited the weaknesses of our human programming, artificial intelligence is poised to use the patterns of our lives to manipulate us. The Loop is call to look at ourselves more clearly—our most creative ideas, our most destructive impulses, the ways we help and hurt one another-so we can put only the best parts of ourselves into the thinking machines we create.

Praise For The Loop: How Technology Is Creating a World Without Choices and How to Fight Back…

“A fascinating survey of the known spectrum of human biases…rebuts the Silicon Valley-esque assumption that A.I. will always do good.” —Cathy O'Neil, New York Times

“Scary stuff…this book has it all [and] the “how to fight back” part is very important.”

"A brilliant explanation of how artificial intelligence turned to the dark side, it’s that rare book that explains a complicated subject — AI — in language anyone can understand, while simultaneously providing the context that every policy maker and citizen will require to deal with it. If AI is to get back on track, then Ward will be the guide."—Roger McNamee, bestselling author of Zucked

"Fascinating and unsettling. The future is here and Jacob Ward's lively narrative takes us headlong into the dangerous foray of artificial intelligence into our very core as humans."—Cecilia Kang, bestselling author of An Ugly Truth

“The Loop is about the unconscious patterns of human behavior and the even less conscious patterns in the software of machine-learning algorithms. Jacob Ward argues, precisely and elegantly, that those magisteria overlap—digital algorithms that take advantage of wobbly human habits increasingly determine how society works, and that may well make us all less happy and less free. When a reporter with Ward’s brains and experience warns you about something this serious, you should listen.”—Adam Rogers, bestselling author of Proof and Full Spectrum

“Ward is a thoughtful reporter who has spent the past decade chronicling the rise of a new set of tools pioneered by social scientists, AI researchers and technology companies. The Loop is simultaneously his powerful account of these forces and a wakeup call to remind us that we retain the capability to escape the silicon tendrils of those who seek to exploit our unconscious tendencies.”—John Markoff, Pulitzer Prize-winning author of Machines of Loving Grace: The Quest for Common Ground Between Humans and Robots

"A salutary effect of growing disillusionment with tech has been a shelf of excellent critiques. But The Loop is a strong entry in the canon...AI represents perhaps the ultimate shiny object. But Ward penetrates to the dark vacancy at its core."

“[The Loop] combines a remarkable synthesis of a mountain of behavioral science research about the human mind, and a travelogue through the world of artificial intelligence history and current practice.”

Jacob Ward is technology correspondent for NBC News, and previously worked as a science and technology correspondent for CNN, Al Jazeera, and PBS. The former editor-in-chief of Popular Science magazine, Ward writes for The New Yorker, Wired, and Men's Health. His ten-episode Audible podcast series, Complicated, discusses humanity's most difficult problems, and he's the host of a four-hour PBS documentary series, "Hacking Your Mind," that introduces a television audience to the fundamental scientific discoveries in human decision making and irrationality. In 2018, he was a Berggruen Fellow at Stanford University’s Center for Advanced Study in the Behavioral Sciences. He lives in Oakland, California.
Loading...
or support indie stores by buying on